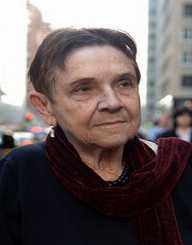 Adrienne Cecile Rich was an American poet, scholar, critic, and feminist. Born on May 16, 1929, she is considered as "one of the most widely read and influential poets of the second half of the 20th century." Rich’s works mostlyreflected her commitment to feminism especially, lesbian rightsand mostly credited for bringing to light "the oppression of women and lesbians to the forefront of poetic discourse." With her strong literary skills from school days, the famous poet W. H. Auden selected her first collection of poetry titled, A Change of World, for the Yale Series of Younger Poets Award. Rich is notoriously known for declining the National Medal of Arts, in her protest against a vote by House Speaker Newt Gingrich to stop funding the National Endowment for the Arts.

Adrienne Cecile Rich was born on May 16, 1929, in Baltimore, Maryland to Arnold Rice Rich and Helen Elizabeth Rich. Her father was a pathologist who served as the chair of pathology at The John Hopkins Medical School and her mother a composer and concert pianist. Rich was an avid reader from childhood and took interest in literaturereading thoroughly from her father’s library. With the encouragement of her father, she took on a mandate to write her own poetry. She was home-schooled by her mother until fourth grade.

She later attended Roland Park County School and after graduating, enrolled for a college diploma at Radcliffe College. She majored in poetry and craft writing. During her final year in the college, poet W. H. Auden selected her maiden collection of poetry, A Change of World, for the Yale Series of Younger Poets Awards. After graduating, she studied for a year at Oxford, with a Guggenheim Fellowship. She later left for Florence, Italy and decided not to return to Oxford.

Rich wrote dozens of poetry and non-fiction works. In 1951, Rich published her first collection of poems, A Change World and followed it with The Diamond Cutters in 1955. She later said she wished the Diamond Cutters went unpublished. Rich received Poetry Society of America’s Ridgely Torrence Memorial Award in 1955.

Rich had a breakthrough in life from the 1960s with much opportunities and honors. In 1960 won the National Institute of Arts and Letters award. The following year, she had her second Guggenheim Fellowship, to work at the Netherlands Economic Institute. In 1962, she had received a Bollingen Foundation grant to translate Dutch poetry.

Rich published Snapshots of a Daughter-in-Law, her third collection, which explored her female identity and her experience as a wife and mother. Other collections like Necessities of life: poems, 1966, Selected Poems, 1967, The Will to Change, 1971 and Diving into the Wreck, 1973 also followed. From 1976, she started writing extensively on lesbianism, stating in her work, Of Woman Born: Motherhood As Experience and Institution, 1976 that she believes lesbianism was a political and personal issue. More of such works includesDream of a Common Language 1978, A Wild Patience Has Taken Me This Far, 1981 and The Fact of a Doorframe in 2001.

He non-fiction works include On Lies, Secrets, and Silence, 1979, Blood, Bread and Poetry, 1986, Arts of the Possible: Essays and Conversations, 2001, Poetry and Commitment: An Essay, 2007 and A Human Eye: Essays on Art in Society, 2009 among several others.

Rich served as a lecturer at Swarthmore College from 1967 to 1969 and added as anadjunct professor in the Writing Division at Columbia University School of the Arts. Until 1975, she also taught in the SEEK program, in City College of NewYork. From 1971, she started teaching at BrandeisUniversity as the Hurst Visiting Professor of Creative Writing and would continue from the next one and half year. In 1975, she served at the Lucy Martin Donnelly Fellow at Bryn Mawr College.

She was an English Professor at Rutgers University and taught at City College from 1976 to 1979. She served as the co-editor of the lesbian art journal Sinister Wisdom from 1981 to 1983. She taught at several other institutions including Stanford University, San Jose State University, and US Santa Cruz among others.

Rich became involved with the New Left after moving to New York with her family in 1966. She became an anti-war, feminist, and civil rights activist. She was a signer of the Writers and Editors War Tax Protest in 1968 that sought to protest against the Vietnam War by refusing to pay tax. Along with her husband, she organized several Black Panther and anti-war fundraising parties in their apartment. She would protest against several other acts of war including the Iraq War.

Rich married an economics professor at Harvard University, Alfred Haskell Conrad. The two settled in Cambridge, Massachusetts. Rich and Alfred had three sons, David, Pablo, and Jacob. Conrad committed suicide by shooting himself after tension grew in their marriage and Rich left the house. Rich died on March 27, 2012, at age 82, in Santa Cruz, California.