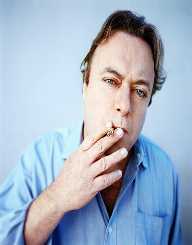 Christopher Hitchens is a British-American essayist, journalist, and columnist known for his blatant criticism of sensitive topics such as religion, war, art, and politics which was published in the general media.

He married twice in his life. The first time is to Eleni Meleagrou whom he met when he was working in Cyrus as a foreign correspondent. Their union brought forth two children: Alexander and Sophia. He was married a second time to Carol Blue in 1991 whom he met in Los Angeles back in 1989.

On December 15, 2011, Hitchens took his last breath at the University of Texas MD Anderson Cancer Center located in Houston. He was 62 at the time and was undergoing treatment for his battle against esophageal cancer, same cancer that killed his father. He was admittedly a heavy drinker and smoker during his younger years which greatly contributed to the sickness. As per his wishes, Hitchens’ body was contributed to medical research and purpose.

Hitchens is the author of the highly controversial but critically acclaimed book, God Is Not Great. The book received mixed responses from the media with The New York Times singing praises out of it and criticism from the Financial Times. God Is Not Great was a nominee for the 2007 National Book Award.

He was also listed under the “25 Most Influential Liberals in the US Media” by Forbes magazine because of his outspoken criticism towards politics. Aside from politics, he anyone under the spotlight came under Hitchens’ scrutinizing eyes such as Mother Teresa, Princess Diana of Wales, Henry Kissinger and US President Bill Clinton.

The Son Of Service Of A Man

Christopher Eric Hitchens was born on April 13, 1949, in Hampshire, England. He is the eldest son of Eric Ernest Hitchens and Yvonne Jean Hitchens. Both of his parents rendered service during World War II as part of the Royal Navy with his mother being a member of the Women’s Royal Naval Service called Wren. He has a younger brother named Peter who later became a conservative journalist in life.

He attended Balliol College in starting in 1976 and graduated with a degree in Philosophy, Economics, and Politics in 1971.

The Start Of A Career In Journalism

In 1981, he was sent to America as a part of an exchange programme between the magazine he worked for, New Statesman, to its American equivalent, The Nation.

Hitchens spent most of his life at America by then, becoming a naturalized American citizen on April 2007. He continued writing literary criticisms as well as musing throughout his life until his death by cancer in 2010.