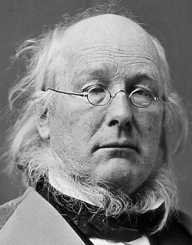 Horace Greeley was the founder of the New York Tribune and later played significant roles in the political landscape as a political enthusiast and crusader. He was best known for his permanent belief in continued American progress. Discreetly, he fought against slavery in North America and spearheaded universal suffrage. He is also the founder of the Liberal Republican Party; a political vehicle he used to run for the American presidency in 1872.

Horace Greeley was born on February 3, 1811, on a farm approximately five miles from Amherst, New Hampshire. He came from a humble background, and his parents were Zaccheus and Mary Greeley who were farmers.  Due to the family financial strain, Greeley attended local schools and was a smart student.

Zaccheus moved his family several times to make ends meet. In 1820, they moved to New Hampshire and settled in Vermont. Greeley loved reading and could read almost anything. His new neighbor had a library and allowed him to use his library.

Influence by his love of books, Horace Greeley, became printer’s apprentice, Editor of the Northern Spector in 1826. This was East Poultney newspaper in Vermont where Greeley learnt all the printers’ mechanics and whet his skills in reading and became known as the town encyclopedia.

When the paper closed in 1830, he worked for the Erie Gazette and the Spirit of the Times in Pennsylvania and New York respectively. While in New York he partnered with Jonas Winchester, and together they published the first issue of The New Yorker on March 22, 1834.  The New Yorker reached a pick of 9,000, but due to poor management, it fell victim to the economic recession of 1837.

As The Tribune Editor

While Horace Greeley was an editor for the New Yorker, the New York political boss Thurlow Weed noticed him. He asked him to produce weekly issues on political campaigns in 1838 and 1840 elections. By agreeing to the deal, he formed a new political partnership with Weed and the New York Governor William H. Seward. His publications largely aided the Whig party, and this partnership went on until 1854.

With the advance in technology, it became more comfortable and affordable to publish a newspaper. Having built his resources, Greeley established the New York Tribune newspaper. He made it a daily Whig party paper to spearhead reforms, economic growth, and public motivation.

To offer The Tribune a stable financial footing, Horace Greeley incorporated attorney Thomas McElrath who bought half The Tribune interest. He became the publisher of The Tribune while Greeley remained the chief editor. His first issue of The Tribune was published on April 10, 1841. The Tribune set a lofty standard in its news coverage, high intellectual and moral standard.

The Tribune paper was known to produce compelling and breathtaking articles and editorials. This made the paper to stand out, and Greeley rose as the outstanding newspaper editor of his time.  Reflecting his high moral background in New England, Greeley was greatly against liquor, tobacco, gambling, prostitution and capital punishment. While this was true for Greeley, it was not the popular ideology held by his Whig party members.

As a political Enthusiast

In 1840, Horace Greeley played a major role campaigning for the Whig’s Party presidential candidate, William Henry Harrison. He accomplished this by publishing a journal called ‘The Log Cabin’ and several campaign songs on behalf of William Harrison. This song praised “Tippecanoe” which was a common nickname for Harrison.

In November 1848, David S. Jackson a congressman was unseated due to election fraud. As the law in force dictated then, the Whig Party committee was presented with a hard decision to make. They had an obligation to choose Jackson’s replacement, and they chose Greeley.

As a congressman, Horace Greeley championed for education reforms, a free common-education system for all, fought for producers’ cooperatives and women’s suffrage. In a great way, he was fond of using the phrase “Go West, young man, and grow up with the country” it is uncertain whether he coined the phrase.

His party members were ambivalent towards slavery. This posed a major threat to Greeley ever gaining support from his party members to a high public office. Therefore, he shifted his allegiance to the new Republican Party which he played a role in organizing. The Tribune editorial columns opposed any compromise on the slavery issue and regularly highlighted the antislavery persuasion prevalent in the North.

Horace Greeley fought for the emancipation of the slaves but lost much public respect when he opposed Lincoln’s nomination in 1864. Lincoln had made preliminary preparation for the Emancipation Proclamation but was hypocritical about it. In his reply to Greeley’s letter dubbed “Prayer of the Twenty Million,” he revealed that he leveraged emancipation of slaves to save the Union. In 1865, Lincoln was assassinated.

Greeley aided the Radical Republicans but later formed the Liberal Republican Party together with other Republican dissenters. The New Party opposed president Ulysses S. Grant and nominated Greeley for president. He received insurmountable criticism for the new cause he had taken. This made him regret the move he had chosen. Regardless of the inexperience of his party, he still managed to poll about 40 percent of the popular election vote.

Horace Greeley married Mary Young Cheney a school teacher. On July 5, 1836, in Warrenton, North Carolina, they got married. 11days later their marriage was announced in the New Yorker. They had seven children, but only two matured to adulthood, five never survived past childhood.

Horace Greeley could not breathe for the first 20minutes after he was born. This inhalation deprivation would have attributed to him developing Asperger’s syndrome, a condition that his biographers maintained had led to his eccentric behaviors.

Just before 1872, dreary elections Greeley was admitted to hospital perhaps due to several reasons. First, he had lost control of the Tribune newspaper. Secondly, he had lost the respect of the people during Lincoln’s `nomination and had opposed Grant in 1872 and thus was facing untold criticism and barely could tell whether he was headed for success or to futility. Due to the changes the political landscape was taking on his life, he despaired and was weakened by his wife’s death. He died on November 29, 1872.

In 1841, Horace Greeley founded the New-York Tribune and remained its editor. He was among the first editors of his time to obtain a full-time correspondence from Washington, a move which was speedily adopted by his rivals. The Tribune established an approachable standard in American journalism, as it portrayed great energy in news gathering, sound taste, irreprehensible moral standards, and high-level intellectual appeal to the public.

Greeley hoped that The Tribune would be a newspaper of national scope one day. Towards the end of 1840, not only had Greeley’s Tribune sold as New York daily paper but also, had gained strong influence nationally. It was circulated in both rural and small towns. Journalist Bayard Taylor noted that The Tribunes influence in the Midwest was second to the bible. Its editorials written by Greeley could influence the public opinions more effectively than the president.

In 1872, Horace Greeley founded the Liberal Republican Party. As a Liberal Republican, he ran for U.S presidency the same year. He is best known for his advocacy against the North’s antislavery campaigns in the 1850s.