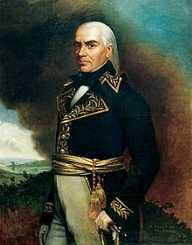 Francisco de Medina was a South American revolutionary responsible for the rise of the Hispanic independence movement against Spanish colonialism.

Francisco de Medina originally called Sebastian Francisco de Miranda y Rodriguez de Espinoza was born in Caracas, Venezuela on March 28, 1750. His father was a Spanish immigrant with a flourishing business empire in Caracas. His mother was native Venezuelan of Creole heritage. The son of an elite family, Francisco was educated in the elite standards of the time. He enrolled at the Academy of Santa Rosa for his preparatory education. In 1762, he joined the Pontifical University of Caracas. He chose to study mathematics, classic Latin, and Catholic theology.

Francisco enlisted in the Spanish military in 1772. He graduated from the military academy as a junior officer. Despite his arrogant character and constant insubordination to orders, he exhibited great military command during his tours. He led Spanish forces in North Africa expeditions. He fought alongside the Continental forces led by George Washington during the American war of independence.

On his return to Caracas, he created many enemies within the forces and the business world. In 1783, he was accused of engaging in selling contraband merchandise. Francisco escaped being jailed by fleeing to the US. He reunited with his old comrades like US President George Washington, Thomas Paine, and Alexander Hamilton. He journeyed to London and petitioned the Spanish king while in exile. His petition was never acted upon.

Unable to return to Caracas, he traveled across European countries. His itinerary included Germany, Austria, Prussia, France, and Russia. In Russia, he is believed to have had an affair with Catherine the Great, Queen of Russia. He returned to London in 1789. Francisco galvanized the Hispanic population in Britain and other South American liberals for an independent revolution in South America. He engaged the British authorities for support against the Spanish who were in bad ties with Britain. The Spanish agents in London took notice of his activities and reported him to Madrid.

Unable to find any financial and military support in London, Francisco went to France. He stayed in Paris while trying to galvanize the French leaders to join in his liberation dream against the Spanish neighbors. In 1792, the coalition of Austria and Prussian armies invaded France. He successfully helped the French defeat the Austrian forces. He made enemies in France due to his perceived influence in the military. In 1793, he was court-martialled twice and survived.

In 1797, Francisco escaped the French surveillance in Paris and left for London. He found a safe haven in London for a while. He was a fugitive in Spanish America and continental Europe. Despite leading the French in military successes against the Austrian-Prussian army, the French held him in extreme suspicion. The remaining European powers hated him for siding with the French during the war. Francisco resolved to settle in London while waiting for the promised British help. He continued galvanizing his Hispanic community in England ready for the revolutionary journey back home. Frustrated by the lack of commitment from the British, Francisco left for the US.

Francisco received a cordial reception from the US President Thomas Jefferson. However, Jefferson declined to offer his government’s help in the liberation cause. He instead allowed Francisco to solicit financial and military help from US nationals who were willing to help. Through his network of friends, Francisco got the help of Samuel Ogden.

Ogden availed finances and logistical support. Francisco got three military vessels Ambassador, Leander, and Hindustan for his journey. Onboard, the ships were over 200 volunteers from the state of New York. He stopped over in the Caribbean for reinforcements. On August 1, 1806, Francisco docked in Coro, Venezuela. They quickly captured the town without much resistance. The Spanish sent a massive expedition to pacify the rebels in two weeks. Francisco abandoned his stronghold before the Spanish forces arrived. He escaped back to London.

The failed invasion of Coro led other revolutionaries led by Simon Bolivar to declare provisional freedom from their Spanish colonial masters. Bolivar traveled to meet Francisco in London. He convinced Francisco to return to Caracas and spearhead the struggle. In 1811, Francisco and Bolivar declared independence from Spain and named the new republic Venezuela. The new republic suffered financial and natural calamities in its inception.

Spanish royalists staged a revolt against the Republicans. In response, the republicans empowered Francisco with imperialistic presidential powers to crush the royalists. He became the first president of a republic in Spanish America. Unable to contain the Spanish army, Francisco made a surrender plea to the Spanish military commander Domingo Monteverde. Bolivar arrested Francisco as he tried to flee Venezuela at the port of La Guairá, and handed him to the Spanish. He was imprisoned in Spain. He died a prisoner on July 14, 1816.

Francisco de Medina or Miranda dreamed of a liberated Spanish America. He traveled across Europe galvanizing support and having high profile affairs with European women. His comrades gave him to the Spanish for betraying them.

He still remains a controversial figure in whichever approach one decides to view his history. While others hail him as the father of Spanish American revolution, others see him as a betrayer and traitor.