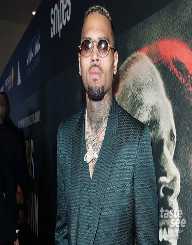 Christopher Maurice Brown best known as Chris Brown is one of the talented and famous African-American singers. Born on May 5, 1989, he is also a songwriter and a skillful dancer. Brown needs not much introduction because he has sold himself out to the world with quality danceable hit tracks which have made waves globally. Brown, who started singing in church at ayoung age has graduated to making hit albums like the self-titled albums in 2004, Exclusive, 2007, F.A.M.E in 2011 and Fortress in 2015 among others. He has also released several hit singles and has featured in songs of top artist including, Jordan Spark, rapper Bow Wow, Lil Wayne, Lil Mama and T-Pain. The album F.A.M.E did not only top the Billboard 200 but also won his first Grammy Award for Best R&B Album at the 54th Grammy Awards.

Brown is not only a singer but has also done some acting jobs. His acting debut was in the film Stomp of the Yard in 2007 and has since played roles in Takers, 20120, Think Like a Man, 2012 and Battle of the Year, 2013. He got into acontroversyin 2009 when an argument with ex-girlfriend Rihanna turned violent ending her in the hospital. He has won several awards, including the BET Award, Billboard Music Award, and Soul Train Music Awards.

Brown was born in Tappahannock, Virginia, to Clinton Brown and Joyce Hawkins. His father corrections officer at a local prison and mother was a daycare center director. Brown is a naturally talented singer and showed the signs at a very young age. Citing Michael Jackson as his source of inspiration, he taught himself how to dance and sing as he listens to soul music and hip pop. He sung in church and also partook in local talent shows which would prompt his mother to look for a record deal for him. He had his education at the Essex High School in Virginia in 2005.

Brown started singing in childhood but took it a step higher when he was discovered by Hitmission Records at age 13 at his father's gas station. He has then given voice training byHis mission'sLamount Fleming as the team also prepared him a demo package and sought for a record deal in New York. He was auditioned at the office of Tina Davis, who was a senior A&F executive of Def Jam Recordings and would later become the manager of Brown. She got impressed with Brown’s performance and then recommended him to the then president of Island Def Jam Music Group, Antonio Reid who also offered to sign him. However, due to a merger of the record company Tina Davis lost her job but would now become the manager of Brown upon his request.

Davis eventually got Brown a record deal with Jive Records even though they also had options like J-Records and Warner Bros. Record. Just after his signing, he commenced recordings of his self-titled album “Chris Brown”. He recorded a total of 50 songs and 14 were selected for listing. The album was finally released on November 29, 2005, and immediately made it to number two on the Billboard 200 selling 154,000 copies the first week. It sold a total 2 million copies in the United States gaining a two-time platinum certification by the RIAA and also made about three million copies sale worldwide. The album’s lead single, Run It, reached the summit of Billboard Hot 100making Brown the first male act since Montell Jordan 1995 to gain that status. Other singles also peaked to the top twenty. He also embarked on the tour, The Up Close and Personal Tour in 2006 and $ 10,000 of the tour proceeds were donated to the St. Jude Children’s Research Hospital.

Exclusive Album And Others

On November 6, 2007, Brown released his second studio album Exclusive in the United States. Exclusive sold 294,000 copies in the first week and also made it to number four on the US Billboard 200 chart. The album had a total sale of 1.9 million in the USas of March 2007 and also supported the album with the Exclusive Holiday Tour in over 30 venues in the US in December 2007 to March 2008. He also featured in Jordin Sparks’ No Air, Ludacris’ What Them Girls Like and T-Pains Freeze. Brown’s later albums include F.A.M.EIN 2011 which was very successful and won him a Grammy Award for Best R&B Album, five BET Awards, Soul Train Music Awards all in 2011. Others are Fortune, 2012, X, 2014 and Fan of a Fan: The Album in 2015.

Brown made an acting debut in January 2007 in the fourth season of the television series The OC and a film debut that same year in Stomp the Yard. He later featured in the MTV’s My Super Sweet 16 when he was celebrating his 18th birthday in New York. For this reason, that episode of the show was titled Chris Brown: My Super 18. He also played a role in the family drama, The Christmas on November 21, 2007.

Chris Brown has been involved in several domestic violence cases but the most prominent among them was his abuse of Rihanna on February 8, 2009. Rihanna had physical injuries and was admitted to the hospital. Brown, on the other hand, turned himself into the Los Angeles Police Department and was later charged with felony assault and making criminal threats on March 5, 2009. During his first appearance in court on April 6, 2009, he pleaded not guilty to the charges but upon his second appearance on June 22, 2009, Brown pleaded guilty to a felony and was slapped with a six months community labour, five years of formal probation as well as a year of domestic violence counselling. The incident affected him commercially as most companies dropped ads he was featured in. It affected his public appearances including his attendance to the 2009 Grammy Awards and some radio stations also withdrew his songs. To salvage his reputation, Brown employed the service of a crises manager which released the statement "Words cannot begin to express how sorry and saddened I am over what transpired." He also released a two-minute apology video to Rihanna and fans.

Chris Brown had a romantic relationship with pop star Rihanna in 2008 though they’ve had been friends since 2005. The once talk of the town relationship ended sourly when Brown physically abused Rihanna in 2009. He went on to date Natalie Mejia of Girlicious fame which also ended in a short while. Brown then dated Karrueche Tran in 2011 but in October 2012 he announced the end of the relationship, saying he doesn’t want to hurt Tran with his new friendship with Rihanna. Rihanna and Brown once again rekindled their romantic relationship in January 2013 but in May same year, the relationship ended. Brown had a daughter, Royalty with Nia Guzman.