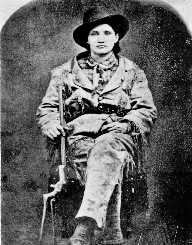 Martha Jane Canary popularly known as Calamity Jane was an American professional scout and frontierswoman. Born on May 1, 1852, she was a friend of Wild Bill Hickok and known for her sharp-shooting abilities. Calamity who also fought against the Indian had a trademark of mostly cross-dressing and an act of kindness towards the needy. She also performed in Wild West shows. Some of her claims are mostly seen as exaggeration or inaccurate.

Calamity Jane was born on May 1, 1852, in Princeton, Missouri to as the eldest child of six by Robert Wilson Canary and Charlotte M. Canary. Her father was a compulsive gambler, and her mother worked as a prostitute. In 1865, the family decided to move to Virginia City, Montana, by wagon train, during which her mother died of pneumonia en route. The family settled in Salt Lake City, Utah, where Robert started farming. He died in 1867.

Now an orphan, Calamity Jane as the eldest child took charge of her five other siblings and moved them to Fort Bridger, Wyoming Territory, arriving there in May 1868 and later to Piedmont, Wyoming. She worked on several jobs to take care of her siblings including dishwashing, dance hall girl, and waitress among others. In her autobiography, she claimed she worked as a scout at Fort Russel in 1874. Jane occasionally worked as a prostitute

Jane took part in several military campaigns against the Indians, and that according to her claims earned her the alias Calamity. However, Captain Jack Crawford who served under Generals George Crook and Wesley Merritt debunked Calamity’s claim in the April 19, 1904 issue of the Montana Anaconda Standard, saying Calamity "never saw service in any capacity under either General Crook or General Miles. She never saw a lynching and never was in an Indian fight. She was simply a notorious character, dissolute and devilish, but possessed a generous streak which made her popular."

Others believe she gained the Calamity due to her promiscuous lifestyle and the boyish stature that made her have some edge over men. Calamity became a thorough woman and adventurous and mostly travelled to gold mining areas. During this time, she also became known for wearing men clothing.

Journey to Deadwood and Acquaintance with Wild Bill Hickok

In 1875, Calamity Jane along with Valentina McGillycuddy and California Joe joined the Newton-Jenney Party to Rapid City to Deadwood during the gold rush. This was where she first met Wild Bill Hickok. She also made friends with others like Dora DuFran and Charlie Utter. According to her, she had affairs with several of the thugs at the time including Wild Bill Hickok, with whom she claims she allegedly married and had the daughter, Jean Hickok Burkhardt McCormick.

Although historians discounted this fact, Jean, insist she is the offspring of Calamity and Wild Bill. Wild Bill was shot dead by Jack McCall on August 2, 1876. After his death, Calamity Jane claims she went after McCall with a meat cleaver, since she had left her gun home to help capture him.

Calamity Jane was also noted for being charitable and generous with a good heart. According to reports, she helped rescue passengers in an overland stagecoach who were pursued by Plains Indian. According to the accounts, the Stagecoach driver John Slaughter was shot dead, and Calamity had to take his place and drove it safely to Deadwood. She also helped in nursing victims of a smallpox epidemic in the Deadwood in 1976. She bought a ranch west of Miles City in Montana in 1881, where she operated an inn. She appeared in Buffalo Bill’s Wild West show as a storyteller in 1893. She was also involved in the Pan-American Exposition in 1901.

Calamity Jane married Clinton Burke, with whom she had a daughter Jesse, who was given out on adoption.

Calamity Jane died on August 1, 1903, from pneumonia and inflammation of the bowels. She had become a heavy drinker during this time and while travelling on an ore train to Terry, South Dakota, she was heavily drunk and fell sick. According to reports, the conductor of the train took her off because of her health. A bartender then secured her a room at the Calloway hotel, where she died. She was buried next to Bill Hickok at Mount Moriah Cemetery, South Dakota.