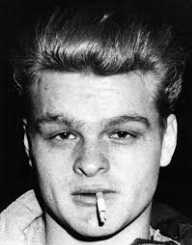 Charles Raymond Starkweather was an American teenager who came into limelight for his criminal acts of murdering 11 people while just being 19 years old. His first killing happened in the year 1957 and the year 1958; he embarked on a spree with his 14-year old girlfriend Caril Ann Fugate while living ten people dead.

Later on, he was caught in a high-speed car chase, and Starkweather was executed on June 25, 1959. His murders have since been remembered through music, film, and books. All these murders happened within the span of 2 months, i.e., from December 1957 to January 1958.

Charles Starkweather was born on 24th of November in the year 1938 in Lincoln, Nebraska to Guy and Helen Starkweather. He had a disturbing childhood as he was bullied when he was just a child which this also forced him to drop out of college at the age of 16.

He was also not born at the most favorable times, i.e., during the great depression era and further he was the third child amongst the seven children that the family had.

The family did suffer from the financial crisis, and so he left school and started working as a lorry loader for a local newspaper business. Copying his favorite star, he also became a romantically involved with a kinder rebellious spirit Caril Ann Fugate who was just 13 years old at that time.

Soon after Charles Starkweather left his job to become a refuse collector, he had convinced himself that because of being poor and being struck by poverty, crime was his only route to financial gain. Following the same ideology, Starkweather took his first victim at the gas station where he murdered the attendant Robert Colvert, for $100 in the early hours of December 1, 1957.

His next attack was on the family of his love. Just because he was denied entry into Fugate’s house, he murdered three members of the family. Not being able to bear that, he killed not only Fugate’s mother and stepfather but also her 2-year-old half-sister and then later lied to the rest of the family claiming that they had flu and are resting in their room. But soon, he flew away as the suspicion had started to grow.

This murderous rampage did not stop there as after fleeing, Charles Starkweather along with his girlfriend drove to friend’s farm and later killed him as well. Because they could not get their car out, they hitched themselves up with another teenage couple by the name of Robert Jensen and Carole King and eventually not only took away their car but murdered them as well.

One day Fugate and Starkweather drove to a suburb of Lincoln, where they sought refuge at the home of a wealthy industrialist, C. Lauer Ward. They killed both Mr. and Mrs. Ward and their maid and then headed to Washington State, where Starkweather's brother lived.

All these killing had created an uproar which ultimately led to the national guards being notified about such a rampage and killing spree. Charles Starkweather was caught when he wanted to switch his vehicle with a new one and in pursuance of the same; he killed the shoe salesman Merle Collison.

Unfortunately, this did not go well as he had a tough time operating this new vehicle which soon grabbed the attention of the passerby which ultimately pushed the whole scenario to a high-speed police chase which eventually ended when the Sheriff Earl Heflin shot out the car's back window.

Charles Starkweather was charged with multiple murders. Though he pleaded innocence by being mentally insane but denying the same, he was sentenced to death and later executed by electric chair in Lincoln on June 25 in the year 1959. Although Fugate claimed that she was a hostage, the jury found her guilty. As she was quite young and only 14 years old when she participated in the murders, she was served with a life sentence. She was paroled in June 1976.