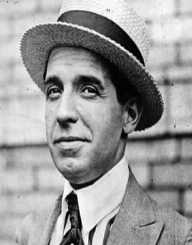 Carlo Pietro Giovanni Guglielmo Tebaldo Ponzi best known as Charles Ponzi was an Italian con artist. Born on March 3, 1882, he lured several people into investing in his scheme by promising huge dividends. Investors earned 50% in 45 days, or 100% profit within 90 days. In this scheme, investors bought discounted postal reply coupons in other countries and redeemed them in the form of arbitrage in the United States. However, it was later discovered that he paid earlier investors with monies of later investors. In fact, it was “robbing Peter to pay Paul” scheme. Investors lost $20 million through its over one year running. This type of scheme is since called “Ponzi scheme,” although Ponzi did not invent it.

Charles Ponzi was born Carlo Pietro Giovanni Guglielmo Tebaldo on March 3, 1882, in Lugo, Italy. In an interview with the New York Times, he said he comes from an affluent family in Parma, Italy. However, his family later had issues with money. Ponzi received education at the University of Rome La Sapienza. Instead of concentrating on his education, he always followed his wealthier friends to clubs and café among others. As a result, he ended up broke and left without a degree.


Migration to the US

In their quest to return to their former glory, Ponzi’s family encouraged him to travel to the United States. At the time, most of the young Italians who moved to the US returned rich. Ponzi went aboard S.S. Vancouver arriving in Boston on Novembers 15, 1903. Soon after his arrival, he learned English. He started working on odd jobs and later as a dishwasher in a restaurant. Eventually, he rose to become a waiter, however, committed theft leading to his dismissal.

Following his initial failure to succeed in the US, Ponzi moved to Canada. He settled in Montreal where he worked with Banco Zarossi, as an assistant teller. It was during this period that he first came to know what later became “Ponzi scheme.” Zarossi was offering customers 6% interest on their deposits, which was twice the rate at the time. The high-interest rate increased to customers who would eventually lose their savings. Instead of paying the interests from investments made, Zarossi used funds of new customers to settle old customers.

Banco Zarossi, therefore, folded up and Zarossi absconded to Mexico with customers’ investments.

Following the close of the bank, Ponzi planned to return to the US. Having no money, he forged the signature of Damien Fournier, a director at Canadian Warehousing on a cheque of $423.58. Luck, however, eluded him this time. His heavy spending gave him out and had to spend three years at the St. Vincent-de-Paul Federal Penitentiary, in Montreal. Upon his release in 1911, he decided to return to the US to start over. However, Ponzi had to spend two years in Atlanta Prison for his involvement in smuggling illegal Italian migrant’s across the US border. While in prison he friended mobster Ignazio “the Wolf” Lupo and businessman Charles W. Morse.

After identifying a loophole in international reply coupon (IRC) from which he could make a profit, Ponzi decided to take advantage. An IRC sent from one country was able to pay for reply postage in the receiving country. For example, an IRC purchased in Italy had a higher value in the US. According to Ponzi, buying IRC cheaply in Italy and selling in the US could generate 400% profit after all expenses. Identifying this great money making venture, Ponzi quit his job as a translator to begin an IRC scheme.

In need of money, Ponzi began a stock company to raise public funds. Also, he took money from friends promising them of 50% returns within 90 days. Later, he made it 50% interests in 45 days. During this period, even banks were giving 5% interest annually. To promote his scheme, Ponzi established the "Securities Exchange Company, in January 1920.

The scheme started with just 18 customers and an investment of $1800. However, it later grew as the news spread of its existence. Ponzi hired other agents, and by June, investments had increased to $2.5 million. The scheme kept flourishing and had no issues even though ideally, it was making losses. He only used monies of later investors to pay previous ones. Meanwhile, he had not found a way to convert the IRS into cash, because it was practically impossible. Charles Ponzi lived a luxurious life with funds of customers.

Ponzi’s quick fortunes began to raise eyebrows. The Boston Post, therefore, decided to investigate the scheme, and that subsequently brought him down. Investors, therefore, started pulling out their money. The scheme came down with huge loses to clients. Customers lost an estimated $20 million (225 million in 2011 dollars). Police arrested on August 12, 1920, with a charge of 86 counts of mail fraud. He pleaded guilty and received five years in prison and released after three and a half years.

Following his released, he faced another 22 charge of larceny in Massachusetts. October 1922, a jury found him not guilty on his first counts of larceny. However, he received seven to years’ imprisonment on his third trial. In all, he served about 14 years for his offenses. He left for Rio de Janeiro after his release.