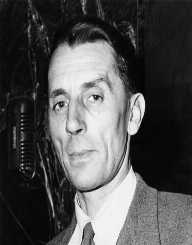 Frédéric Joliot-Curie was born on March 19th, in 1900. He was a renowned French physicist. Frédéric was also famous for being the husband of Irène Joliot-Curie. His wife was a Nobel Prize winner in chemistry in 1935.

Frédéric Joliot-Curie was born on March 19th, 1900. His place of birth was in Paris in France. He was the son of Emilie Roederer and Henri Joliot. His father worked as a professional merchant. After graduating from ESPCI ParisTech, he took over as Marie Curie assistant while working at Radium Institute. It was here that he met Irène Curie who was Marie Curie’s daughter. The two fell head over heels in love with each other.

Frédéric worked at Paris Faculty of Science as a lecturer. It was around this time that he partnered with his wife, Irène Curie in researching more about the atom’s structure. Later in 1935, the couple was awarded a Nobel Prize in chemistry. This was due to their discovery of artificial radioactivity.

Two years later, Frédéric departed the Radium Institute and went to Collège de France where he worked as a professor. He also continued with his research while at the institution. World War II affected his research progress as he had to stop for a while.

Frédéric married Irène Curie on October 4th, in 1926. After getting married, they decided to hyphenate their surnames to Joliot-Curie. The pair welcomed a daughter into their relationship named Helena Langevin-Joliot. She also followed her parent’s footsteps and became a renowned scientist.

Frédéric Joliot-Curie passed away on August 14th, in 1958. He died at the age of 58 in the homeland in Paris.