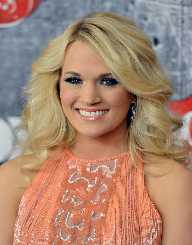 Carrie Underwood was born on March 10th, in 1983. She is famous for being an American singer and a songwriter. She earned high acclaim in 2005 after emerging as the champion in American Idol during its fourth season.

During the same year, she released Some Hearts which also brought her to the limelight. Hit singles that garnered her immense fame included “Before He Cheats” and “Jesus, Take the Wheel.”

Carrie Underwood was born on March 10th, in 1983. Her place of birth was in Muskogee, Oklahoma. She is the daughter of Carole and Steve Underwood. Her two older siblings are Stephanie and Shanna.

Carrie Underwood was raised in a humble background by her parents. Her mother was a school teacher whereas her father offered his services in a paper mill. Growing up, she was regarded as hyperactive.

As a result, medical experts found out that she was suffering from the attention deficit hyperactive disorder.

At the time, Carrie Underwood had decided to set aside her dreams of one day becoming a famous singer. Nevertheless, while in her senior year, she opted to try her luck in American Idol. Fortunately, fate was on her side and that she won the fourth season of the show.

Shortly after, Carrie Underwood took her music career seriously and released her first hit single in mid-2005. This single was called “Inside Your Heaven.” Later that year, in November, Underwood hit the headlines again with the release of her debut album – Some Hearts. The album was a major hit as it topped the Billboard Top Country Albums.

Similarly, the album was highly ranked on the Billboard 200. Some Hearts album earned Underwood a major recognition in the music industry for it bagged home some awards during its release.

In late 2007, Carrie Underwood released her second album dubbed Carnival Ride. Her second album did not perform as well as her first album. Regardless, the album managed to sell over 527,000 copies during its first week.

It also topped the Billboard 200 and the Canadian Albums Chart. Within two months after the release of the album, it became a certified double platinum album.

Three months after celebrating her 26th birthday, Carrie Underwood became a member of Grand Ole Opry. This was after receiving an invitation from Randy Travis to join the group.

In November 3rd, 2009, Carrie Underwood released her third album called Play On. This was another hit at the album topped the Billboard 200. Also, it landed as the top album in the Top Country Albums chart. During its first week, the album sold over 318, 000 copies.

On Jul 10th, 2010, Carrie Underwood tied the knot with Mike Fisher, a famed hockey player. The two were blessed with their first born son on February 27th, 2015. Being a celebrity, Underwood announced the arrival of her son on Twitter.