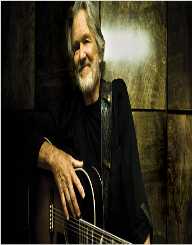 Kris Kristofferson was born on June 22, 1936. He is a songwriter. He is known for penning classics such as ‘Once More with Feeling,’ ‘For the Good Times,’ ‘Help Me Make it Through the Night’ among others. Kris Kristofferson is also an actor and has appeared in films such as ‘The Last Movie’ and ‘Alice Does Not Live Here Anymore’ among other films.

Kris Kristofferson was born on June 22, 1936, in Brownsville, Texas. He was born to Lars Henry Kristofferson who was an Air force major General and Marry Ann. He attended San Mateo High School where he graduated from in 1954. He later joined Panama College in Claremont. At the college, he won a short story contest that was conducted by Atlantic Monthly Magazine. He later joined Oxford University through a Rhode’s Scholarship and graduated from the University with a B. Phil in English Literature. He graduated from the University in 1960.

After Kris Kristofferson graduated from Oxford University, he joined the army. He was posted in West Germany where he served for the American Army. In 1965, he became an English Instructor at the West Point Military Academy. He later resigned from the army and started pursuing a career in songwriting. He moved to Nashville where he became a songwriter with Viet Nam Blues for singer Dave Dudley. In the 1970s his songs ‘Sunday Mornin’ Comin’ Down,’ ‘Once More with Feeling,’ ‘For the Good Times’ and ‘Help Me Make It Through the Night’ were recorded by Ray Stevens, Jerry Lee Lewis, Rap Price and Sammi Smith respectively.

In 1971, Kris Kristofferson released his second album ‘The Silver Tongued Devil and I’ after his first album was unsuccessful. His second album made him famous as a singer because it was a hit as it topped the country and pop charts. In the same year, he made his acting debut with the movie ‘The Last Movie.’ Kris Kristofferson also starred in the movie ‘Cisco Pike.’ He later released his third album ‘Border Lord’, Jesus Was a Capricorn’ which was a success. The single ‘Why Me’ was the most successful. In 1973, he starred in the film ‘Pat Garrett and Billy the Kid’ alongside James Coburn and Bob Dylan. He later released a duet album with his wife Rita Coolidge titled ‘Full Moon.’ They also released the albums ‘Fall into Spring’ and ‘Spooky Lady’s Slideshow’ which were not successful.

In 1974, Kris Kristofferson starred in the movie ‘Alice Doesn’t Live Here Anymore’ alongside actress Ellen Burstyn. In 1976, he appeared in the film ‘Vigilant Force.’ Two years later he starred in the film ‘Convoy’ which was a success as it made $45 million at the box office. In 1979, he participated in the Havana Jam. In 1982, he released the double album ‘The Winning Hand’ in collaboration with Willie Nelson, Dolly Parton, and Brenda Lee. In 1989, he formed the group ‘The Highwaymen’ with Willie Nelson, Johnny Cash, and Waylon Jennings.

In 1998, Kris Kristofferson starred in the movie ‘Blade’ alongside Wesley Snipes. He starred in other films such as ‘Dreamer: Inspired by a True Story,’ ‘The Wendell Baker Story,’ ‘Planet of Apes’ and ‘Beer for My Horses.’ Between 2001 and 2008, He released the album ‘This Old Road.’ In 2009, he released his album ‘Closer to the Bone’. In the same year, he appeared in the film ‘Dolphin Tale’. In 2014, Kris Kristofferson appeared in the film’s sequel ‘Dolphin Tale 2’.

Kris Kristofferson married three times. He first married Frances Bier and then singer Rita Coolidge. He is currently married to his third wife, Lisa Meyers. He has eight children.