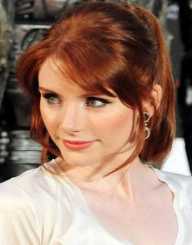 Bryce Dallas Howard was born on March 2, 1981. She is an American Film Actress. She is Thirty-six years of age.

Bryce Dallas Howard was born on March 2, 1981, in Los Angeles in California, United States of America. She was born to Ron Howard and Cheryl Howard. She was brought up alongside three siblings. She had her earlier life at Greenwich in Connecticut. She started her early education at the Greenwich country day school. In 1996, she graduated. She later joined Byram hills high school which was situated at Armonk in New York. She thereafter attended Steppenwolf Theatre company’s school back in Chicago. She in turn joined Stagedoor Manor performing arts camp in Catskills.

In 1995, Bryce Dallas Howard performed as an extra for her first time in ‘Apollo 13’ which was her father’s film. In 2000, she was also featured as an extra in the ‘How the Grinch Stole Christmas.’ She thereafter in the later years featured in other New York’s plays that included ‘House and Garden’ which was an Alan Ayckbourn production. She later joined the Tisch School of Arts to major in drama. In 2003, she graduated with an honorary degree in drama.

Bryce Dallas Howard started performing at the Broadway productions of classical plays. She also took part in the concept recording in ‘A tale of two cities’, which was a musical. She later performed as ‘Rosalind’ in ‘As you like it’ a William Shakespeare’s comedy production. She was thereafter given a first break by director Manoj N. Shyamalan after she impressed him.

In 2004, Bryce Dallas Howard featured in ‘Book of Love’ which was an Alan Brown’s directed film. She after that in the same year performed her first major role as a female lead in ‘The Village’ a Manoj N. Shyamalan’s thriller. In 2005, she replaced Nicole Kidman and featured as Grace Mulligan in the ‘Manderlay.’ In 2006, she starred as a nymph in Manoj N Shyamalan’s fantasy film. She later in the same year wrote and directed ‘Orchids’ which was a short film that was also a substantial part of the ‘Reel Moments’ a Glamour magazine series.

In 2008, Bryce Dallas Howard was featured in the ‘Terminator salvation’ where she replaced Charlotte Gainsbourg as Kate Connor. In 2009, she was engaged in playing in the ‘The loss of a teardrop diamond’ as a female lead. In 2010, she was featured in ‘Hereafter’ a Clint Eastwood’s film. In 2011, she played in an American drama film ‘The Help.’ She later in the year majored in sharpening her director and producer skills. She then co-produced a film titled ‘Restless.’ She after that took a role in directing and co-writing screenplays of ‘The Originals’ Film. She is on the latter now working as a director on the ‘Five More’ which is a film.

In 2011, Bryce Dallas Howard emerged the best and took home the MTV movie award under best fight category in the film ‘The Twilight Saga: Eclipse.’ She also received ‘Black film critics circle’ award. She was then honored with ‘Black reel award.’ She also received the ‘Broadcast Film Critics Association award.’

Bryce Dallas Howard after that won the ‘Hollywood Film Festival award.’ In 2012, she emerged victorious on ‘The Help’ film by winning awards such as ‘Satellite award’ which she got for best cast. She also won the ‘Screen actors guild award’ for great performance. She then took home the ‘Southeastern film critics association award’ in conjunction with the ‘Women film critics circle award’ which she got for the best ensemble.

In 2006, Bryce Dallas Howard got married to Seth Gabel with whom they had two children. She is currently of Thirty-six years of age.