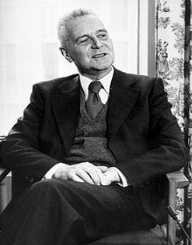 Norwegian economic and Nobel laureate Ragnar Frisch was born on the 3 March 1895 in Oslo, Norway into a family of German descent. His father worked as a gold and silversmith.

After completing high school in 1913, Ragnar Frisch followed the family tradition and began an apprenticeship as a gold and silversmith. His mother, Ragna Fredrikke Kittilsen, suggested that he also do a tertiary degree. He enrolled at the university in 1916 and graduated in 1919, majoring in economics. In 1920 he completed his apprenticeship. He continued with his tertiary studies, earning a doctorate in mathematical statistics in 1926.

Ragnar Frisch was involved in the international community of econometrics from the mid-1920s. He was made assistant professor at the University of Oslo in 1925

His first economic paper was published in 1926, and Ragnar Frisch also published papers on theoretical statistics. He also received a three-year fellowship from the Laura Spelman Rockefeller Memorial in 1927. During 1927-1928 he was in the United States, also visiting Italy and France.

In 1930 he founded the Econometric Society and attended the first meeting in Lausanne, Switzerland in September 1931.

Ragnar Frisch collaborated with Dutch economist Jan Tinbergen in pioneering the development of mathematical formulations relating to economics. He came up with the word econometrics for his statistical methods to describe economic systems. He believed that econometrics would assist in establishing economics as a science.

He was strongly opposed to Norway joining the European Economic Community.

Ragnar Frisch was the inaugural editor of Econometrica and remained involved with the Econometric Society throughout his career.

Ragnar Frisch remained the director of the Institute of Economics at Oslo University until his retirement in 1965. As the only Norwegian economist on the international stage for many years, he is highly regarded as a pioneering figure in Norwegian economics.

In 1969 Frisch shared the first Nobel prize for economics with his collaborator Jan Tinbergen. The pair were awarded the prize for their pioneering work on model econometric model building and theories on long-term economic planning and stabilization policy.

The Frisch Centre at Oslo University is named in his honor.

Ragnar Frisch was married twice. His first wife was Marie Smedal whom he married in 1920. The couple had one child, a daughter Ragna. Smedal died in 1952, and he remarried Astrid Johannessen whom he remained married to until his death in 1973.

During World War II Ragnar Frisch was interned in a German camp in occupied Norway.

Ragnar Frisch died on the 31 January 1973. He was seventy-seven years of age.

Ragnar Frisch was a religious person and a member of the Lutheran-Evangelical Church.

His hobbies including beekeeping which Ragnar Frisch once described as an obsession.