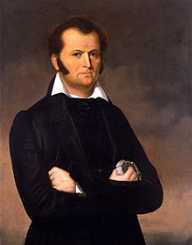 Jim Bowie was an American military leader and folk hero.

James Bowie was born on March 10, 1796, in Logan County, Kentucky. His father’s name was Rezin and his mother’s name was Elve. He had nine siblings. His family owned a large farm with plenty of animals and several slaves. When he was four years old, the family moved to Missouri. Two years later, they moved to Louisiana. They lived in several locations in Louisiana before settling down in the town of Opelousas.

Bowie bought land and developed estates together with his brothers. He raised money from his partnership with the pirate Jean Lafitte. He smuggled slaves and put them up for auction. He built a steam mill that was used to grind sugar cane. He also built textile mills, cotton mills, and wood mills.

Bowie became engaged to a woman named Cecilia Wells in 1829. She passed away just a few weeks before their wedding. Two years later, he married Maria Ursula de Veramendi, the daughter of one of his business partners. They had a daughter named Maria Elve and a son named James Veramendi. His wife and kids died from cholera in 1833.

In 1819, Bowie fought in the Long Expedition, an attempt to take control of Spanish Texas. In 1827, he dueled with Norris Wright, the head of Rapides Parish.  He managed to kill Wright despite the fact that he was seriously injured. The incident became known as the Sandbar Fight and it received a lot of attention. The specific type of knife that Bowie used became very famous. In 1830, he relocated to Texas. He joined the Texas Revolution in 1835. He became the commander of a group of voluntary soldiers. He fought in the Battle of Concepcion and in the Grass Fight.

Bowie fell ill before the Battle of the Alamo and could no longer perform his duties as commander. He died when the Mexicans attacked on March 6, 1836. His body was burned on a funeral pyre together with the other soldiers. A year later, general Juan Seguin interred the ashes at the Cathedral of San Fernando.

Jim Bowie was the star of many folk tales and stories that have appeared in the national press. A county, a town, and an elementary school in Texas were named after him. In 1946, author Monte Barrett wrote the novel Tempered Blade, based on his life. In 1956, the novel was adapted into a TV series on CBS, called The Adventures of Jim Bowie. Bowie’s character was also featured in a number of films that depicted the Battle of the Alamo. In the 1960s, singer David Jones changed his name to David Bowie because he admired the folk legend. In 1988, Jim Bowie posthumously became a part of the Blade Magazine Cutlery Hall of Fame.