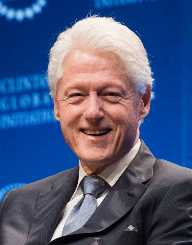 Bill Clinton was born on August 19th in 1946. His birthplace was in Hope, Arkansas. In 1975, Clinton got married to Hillary Rodham and got elected as Arkansas attorney general in 1976. Two years later he landed himself in the governor’s seat making him the youngest governor of the country at that time.

In 1993, he rose up his political career to become the 42nd president of the U.S.A. During his tenure as the president, Bill Clinton foresaw the enactment of laws such as the Family and Medical Leave Act of 1993. Besides this, his ruling was attributed with a rise in the U.S. economy.

Controversy also surrounded his presidency as Bill Clinton was involved in a sexual relationship with one of the White House former interns, Monica Lewinsky. This made him the second president in the history of America to be impeached by the House of Representatives. After leaving office, Clinton has not been away from the public eye as he has been busy campaigning for his wife in the 2008 and 2016 presidential elections.

William Jefferson Blythe III AKA Bill Clinton was born on August 19, 1946. Clinton’s father was called William Jefferson Blythe. Jr. Clinton did not get the chance to see his father following his tragic death involving a car crash. This unfortunate event occurred only three months before Clinton was born. Clinton’s mother was called Virginia Dell Cassidy. She passed away in 1994 after struggling with breast cancer.

Bill Clinton went to an all-white-school called Hot Springs High School where he was known for being a talented saxophonist. In 1963, Clinton went to Boys State. This was a place where students would be tutored on government service programs. Being a Boys Nation representative for Arkansas, Clinton earned himself a lifetime opportunity to meet the president, John F. Kennedy at the White House.

Later on in his political career, he would argue that this was one of the reasons that motivated him to try his luck as a public figure. It is also during the same trip that Clinton met with his political role model, J. William Fulbright.

Bill Clinton plunged into politics right from the time he was at the Georgetown University. Here, he was studying international affairs. He managed to win the president’s position of freshman and second year classes. With time, he earned himself a job as a Foreign Relations Committee clerk which was under Fulbright, a senator.

After Bill Clinton completed his education, he landed himself a job as a lecturer at the University of Arkansas Law School. This was the time when he made a decision of entering into politics. In 1974, he made his first challenge by attempting to join the U.S. House of Representatives. His rival for the seat was John Paul Hammerschmidt.

Clinton lost the contest but it gave him hope that he could achieve more in politics as he was defeated by a close range. In a span of two years, he became the attorney general and this was followed closely by his entry into the governorship position in 1978. He was only 32 years old when he became the governor of the state.

Clinton’s first term in office as a governor was accompanied with a series of unfortunate events that made him fail. Regardless of this, his people had high hopes in him and elected him back to office in 1982. After this re-election, Clinton did his best to retain the post for four successive terms.

In the Democratic Party nominees’ elections for presidency, Bill Clinton emerged victorious as he was easily chosen to become the party’s flag bearer in the coming 1992 elections. He chose Al Gore, Tennessee Senator, to stand as his running mate. The advantage that was on Clinton’s side was that the serving president at that time, President George H.W. Bush, had failed to uphold his promise of not raising taxes. Thus, he was considered as the least favorite to win the elections. With support from family and renowned political friends, Bill Clinton was elected as the next president of the United States. He was to serve as the 42nd president of the U.S.

In spite of the economic success of guiding the nation into prosperity, Bill Clinton’s tenure was adversely affected by the affair he had with Monica Lewinsky. She had been working as an intern for the White House which later led to sexual relations with former President Clinton. This also contributed to his impeachment with regards to the Monica Lewinsky scandal. He was the second president to be impeached after Andrew Johnson, the 17th president of the U.S.

Bill Clinton wedded Hillary Rodham in 1975. The pair had a daughter in 1980 and named her Chelsea. Clinton’s wife also pursued a successful career where she was a candidate in the 2008 and 2016 presidential elections.