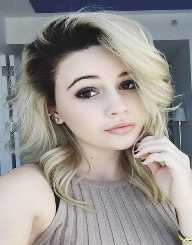 Bea Miller was born on the 7 February 1999 in Maplewood, New Jersey. Her parents are Hilary Kipnis and Kim Miller, and she has two sisters, Esther and Georgia. Esther and George were adopted from Vietnam.

Bea Miller first came to public attention when she appeared on the Reality TV show The X-Factor. Britney Spears was her X-Factor mentor. She finished ninth and was subsequently offered a recording deal with Hollywood Records/Syco Music.

Her version of Cyndi Lauper's Time After Time was simplified on the X-Factor. Her first single Young Blood was released in 2014 and rose to No 64 on Billboard 200. Her debut EP of the same title quickly rose to No.2 on iTunes. Shortly afterward in 2015, Not An Apology was No seven on Billboard. Miller began touring.

Bea Miller is currently with Syco Music and Hollywood Records.

Early appearances including acting in a Teddy Grams commercial when she was nine years old and voice-over work in Toy Story 3.

Bea Miller toured with Selena Gomez during 2016. She was the opening act on Gomez’s Revival Tour, as was DNCE. She continued releasing music throughout 2016, including a single Yes Girl (May 2016) and Song Like You which she performed on the Revival Tour.

Her This Little Light of Mine, was played in an advertising campaign for 3 Musketeers. Then in 2017, she released an EP, Chapter One Blue, featuring Song Like You, Burning Bridges and I Can’t Breathe.
Miller has releases planned throughout 2017.

Bea Miller dated singer in Jacob Whitesides 2015, but the couple later broke up.