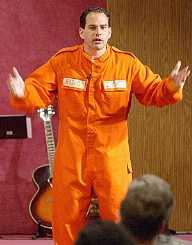 Barry Minkow was born on the 22 March 1966 in California. His mother worked at a carpet-cleaning firm, and when he was a child, she managed to get him a part-time job as a telemarketer.

Barry Minkow was a pupil at Cleveland High School in Reseda. He also has degrees in divinity and religion.

In 1982 when Barry Minkow was a teenager of sixteen, he started operating a carpet-cleaning business, Zzzz Best, which he turned into a franchise company. He began the business working out of his parent's garage, and at age twenty he was a millionaire with a company had over a thousand employees. He listed the company when he was twenty and at one stage was worth $100 million. Some commentators referred to him as the Boy Wonder of Wall Street. During this time Minkow appeared in the national media and also gave lectures at various business schools.

Barry Minkow was arrested in 1987 after a Californian newspaper exposed his company as a front for a massive 300 million dollar Ponzi scheme that was defrauding people. A Los Angeles Times investigation reported that Zzzz Best was a credit card fraud scam based on mostly fabricated orders. Barry Minkow subsequently spent twenty-five years in prison and was let out on parole after serving eight years of his sentence.

Barry Minkow converted to Christianity in prison was released in 1995. He published an account of the scam, a book entitled Clean Sweep and profits went to his victims. In 1997 he became head pastor of the Community Bible Church in San Diego, California and 2001 helped co-found the non-profit Fraud Discovery Institute. He wrote another book Cleaning Up (2005) which became a bestseller.

As Minkow helped set up the institute and started getting results, he was featured in financial publications as well as a guest on Your World as a fraud expert. In August 2006, 60 Minutes featured Minkow, and larger investors began enlisting him to uncover fraud on their behalf. He later said that he had exposed a billion dollars of fraudulent transactions.

Then in 2011, Barry Minkow was again in court accused of attempting to damage a Florida homebuilding company which had caused the market value of the company to fall by over $500 million. He pleaded guilty to producing false reports and was sentenced to five years in prison.

During 2014 Barry Minkow was convicted of embezzling money from his San Diego church congregation to the tune of $3 million and sentenced to five years in prison. The church was also left with unauthorized loans which he took out on their behalf amounting to millions of dollars.

Barry Minkow married his wife Lisa in 2002, and the couple has two children.

Minkow (2017) is a film about his life was directed by Bruce Caulk, starring Justin Baldoni, Mark Hamill, Elisabeth and Talia Shire.