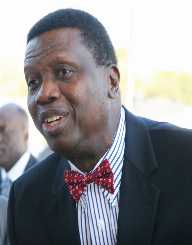 Known by his nicknames Daddy GO, and Pastor Adeboye, Enoch Adeboye is a famous Nigerian pastor who rose to international fame when he was appointed the General Overseer of Redeemed Christian Church of God (RCCG). Before being head of the church, he was invested in academics and was a mathematics professor. In 1973, Adeboye, who had previously been a believer in God, had a revelation and became a born-again Christian through the church. Afterwards, he dedicated his life to his faith. He went as far as to leave his beloved teaching job to become a full-time preacher for the Nigerian branch of the RCCG.

Enoch Adeboye has been granted many awards and notices of recognition for his services, including the Order of the Federal Republic of Nigeria, which was presented to him by the Nigerian president in 2008, and the title of one of the ‘World’s Fifty Most Powerful People’, by the Newsweek magazine in the United States.

Enoch Adeboye was born on March 2, 1942, in the village of Femara, Nigeria. He was born to a poor couple and had three siblings. His father was a farmer who lacked education and, in turn, didn’t believe in educating his children. Enoch Adeboye and his siblings never attended school.

From an early age, Enoch Adeboye was adamant about receiving a formal education. However, his claims were always dismissed by his father. At one point, Adeboye went on a self-induced hunger-strike to try to persuade his father to change his mind.

Eventually, Enoch Adeboye father gave in and, to send his son to school, sold his family’s goat to pay the school fees. Enoch enrolled in his village’s only missionary school and began his academic career. Despite starting school late in comparison to his schoolmates, he discovered that he loved to read and was admitted into the Ilesha Grammar School in Ilesha, Nigeria for secondary school education. Here, he discovered an interest in mathematics and science. It was in his early school years that he decided that he wanted to receive a higher education. However, by the time he was old enough to attend university, Nigeria was in the midst of a civil war.

Despite the war and his family’s financial troubles, Enoch Adeboye achieved his goals and was credited with a Bachelor’s Degree in Mathematics (1967), a Masters Degree in Hydrodynamics (1969), and a Doctorate Degree in Applied Mathematics (1975).

Shortly after obtaining his degrees, Enoch Adeboye landed a job teaching mathematics to university students at the universities of Lagos and Ilorin. His goal was to become the youngest Vice-Chancellor at any of the high-end Nigerian universities within the country.

In 1968, and when he was just 25 years old, Enoch Adeboye married FolukeAdenike Adeboye (nee Adeyokunnu). The newly-weds ran into trouble when trying to conceive a child, but continued to try. Eventually, their efforts were rewarded with the birth of two children, who were born by way of caesarian section.

The coupled longed for more children despite their previous problems and gave their childbearing efforts to their faith to decide.  When their children had grown up, they all became pastors, and some of them gave Enoch Adeboye grandchildren in which to love and care for as he had his children.

Current Life as a Pastor

They began to attend at RCCG in 1973, and by 1975 he was promoted to pastor after dedicating his life to the church. His career at the church began with Adeboye translating the head pastor’s sermons from Yoruba, which was his native language, to English. He then started to organize Bible meetings, crusades, revivals, outreaches, and evangelistic programs such as the church’s congress. The head pastor, known by the name of Josiah OlufemiAkindayomi, was impressed with Adeboye’s devotion and decided that he was to be his successor.

In 1981, Akindayomi passed away, and Enoch Adeboye took his place as the church’s General Overseer. Once promoted to the lead position within the church, Adeboye dedicated time to expanding the church’s teachings by way of the outreach program that had been in place. Thanks to this effort, RCCG now has branches in various countries around the world including Germany, India, United Kingdom, and the United States.