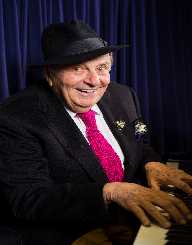 John Barry Humphries was born on February 17, 1934, in Kew, Melbourne, Australia. His father was a construction manager. He developed his interest in theater at a young age when he began dressing up and disguising himself in different characters. In his teens, Humphries became more rebellious against the suburban life and began to dismay his parents. However, his parents understood his attitude and dealt with it.

Humphries attended the Camberwell Grammar School and later went to Melbourne Grammar School. After that, he enrolled at the University of Melbourne to study Law, Philosophy and Fine Arts. He became involved with the Australian deconstructive and absurdist art movement Dada. During 1952-1953, he and several other performers made Dada-influenced recordings named “Wubbo Music,” which is known to be the earliest experimental music recordings in Australia.

After Humphries left the university, he joined the Melbourne Theatre Company and created his character, Edna Everage. In 1957, he moved to Sydney to join the Phillip Street Revue Theatre. His first appearance in the theater was in the satire Two to One, which was followed by Around the Loop. In 1958, he once again performed in Melbourne, where he brought his two most famous characters Mrs. Everage and Sandy Stone to stage.

In 1959, Humphries decided to move to London and remained there throughout the 1960s. He became acquainted with the leading British comedians and actors. He began to perform at Peter Cook’s comedian venue The Establishment. He also began working at the cartoon strip The Wonderful World of Barry McKenzie. Humphries became a frequent performer on several West End stage productions, like Oliver!, Maggie May and The Bed-Sitting Room. The production of Oliver! Brought Humphries name to widespread recognition. In 1967, he landed a role in the hit film Bedazzled and later appeared in The Bliss of Mrs. Blossom. Humphries also began to appear on BBC-TV.

Barry Humphries began his film and television career in the 1960s. One of his early most successful projects wat the UK sex comedy Percy’s Progress in 1974. He also starred in films such as Side by Side, The Getting of Wisdom and the musical film Sgt. Pepper’s Lonely Hearts Club Band. During the 1980s, he starred in several featured roles, like in Dr. Fischer of Geneva and the Howling III. One of the most successful projects of this decade were The Secret Policeman’s Other Ball and A Night of Comic Relief 2.

Throughout his career, Humphries has made several television appearances in Australia, UK, and the US. In the UK his most successful work was The Dame Edna Experience. In the US, he wrote and starred in the shows The Life and Death of Sandy Stone and the Barry Humphries’ Flashbacks. His latest work includes the 2007 UK series The Dame Edna Treatment.

In 2000, Humphries went to the United States with the tour Dame Edna: The Royal Tour. For his role, Humphries won the Special Tony Award for a Live Theatrical Even and the National Broadway Theatre Award. Dame Edna became popular in US and Humphries made several appearances, like in the hit television show Ally McBeal. In 2011, Humphries had the role of Goblin King in the hit three-part film The Hobbit. Then in 2013, he joined the Australian ABC’s telemovie series, Jack Irish.

In 2012, Humphries announced that he would be retiring from live entertainment. His Australian farewell tour “Eat, Pray, Laugh!” began in Canberra in 2012.

During the 1960s, Humphries developed alcohol addiction, which contributed to ending of his first two marriages. In the early 1970s, his alcoholism became increasingly worse, and Humphries was admitted to a hospital. Since then, he regularly attends Alcoholics Anonymous.