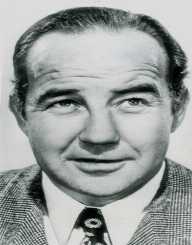 Broderick Crawford was an American Oscar-winning Film, TV, Radio and stage actor born in 1911. He often acted the role of tough-guy in most films. He is best remembered for his Oscar-winning role at All the King's Men portrayed as Willie Stark.  From 1955 to 199 he starred in Highway Patrol as Chief Dan Matthews. He put his comic skills to use in Born Yesterday and his robust guy features in Scandal Sheet. For most of his career years, Crawford featured in Many TV series and Hollywood productions.  This took him to greater heights of his career. Despite his success in acting, he had a drinking problem which greatly influenced his reputation. His reputation went down in the following years, but he still went on with his acting career.

Broderick Crawford was born William Broderick Crawford on December 9th, 1911. His place of birth was Philadelphia in Pennsylvania. His father was Lester Crawford who was a famous vaudeville performer. His mother Helen Broderick was a film and Broadway actress. His acting career was greatly influenced by his parents. As a young boy, he sometimes played some roles in their comedy productions.

Broderick Crawford began his early education at the Dean Academy in Franklin in Massachusetts. During this time he participated in many sports which were a great success. He took part in swimming, athletes, baseball, and football. Later his parents persuaded him to enroll in Harvard University. He, therefore, joined the University but did not finish his studies. Instead, he took a job at the New York docks where he served as a stevedore. Before his later career in acting, he worked as a professional boxer among other careers.

His acting career kicked off with his role in She Loves Me No in 1934. He acted the part at the Adelphi Theatre situated in London. In 1937 he assumed the Broadway production of John Steinbeck entitled Of Mice and Men.

Broderick Crawford later began his Hollywood acting from 1939. He featured in Beau Geste then in 1972 performed a supporting role in Larceny, Inc. He was inducted to the US Army Air Corps during the Second World War. He served as a sergeant and Radio announcer for the army in Britain in 1944. After the war, he continued his acting career.

Broderick Crawford featured in the film All the King's Men in 1949. He acted the role of Willie Stark in the movie. The film earned him an Oscar Award after it became a huge success and hit that year. A year later in 1950, he appeared in Born Yesterday. Throughout the 1950s he acted many roles in many productions.

In 1962 Broderick Crawford continued his acting in movies. He acted a role in the 1960 film La vendetta di Ercole by Vittorio Cottafavi. He also had a role in the 1963 film The Castilian by Javier Setó. From then till 1970 Crawford appeared in over 17 film productions. His final act in his career was marked by the series Simon and Simon in 1982.

Broderick Crawford was presented with Academy Award for Best Actor through his role in the 1949 All the King's Men. He received two stars for his Hollywood Walk of Fame.

Broderick Crawford married three times in his life. His first marriage was to Kay Griffith in 1940. They had two children and divorced in 1948. He remarried in 1962 to Joan Tabor and later parted ways in 1967. His wife Mary Alice Moore was his third wife. He tied the knot with her in 1973. Broderick Crawford was still his wife at the time of his death in 1986.

Broderick Crawford took his last breath on April 26th, 1986 at the age of 74. He had suffered a suffered a series of strokes and died in Rancho Mirage in California.