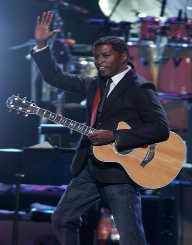 Kenneth Brian Edmonds alias Babyface was born on April 10th, 1959. He is famed for being an American singer, record producer, and a talented songwriter. Throughout his successful music career, Babyface boasts of the fact that his songwriting career has landed over twenty-six number one R&B hits. Accordingly, he has been bestowed with up to 11 Grammy Awards.

Kenneth Brian Edmonds AKA Babyface was born on April 10th, in 1959. His place of birth was in Indianapolis, in Indiana. He was the second born son of Barbara and Marvin Edmonds. Babyface was the second born child in a family of six children. Right from a tender age, he began practicing with musical instruments such as the guitar and keyboard. After some time, he joined the Manchild band where he often performed with them. Back in the day, Babyface also performed with a renowned funk legend called Bootsy Collins. It is this individual that Edmonds was given the nickname “Babyface.”

Babyface music career took off while he was still young. During his tender ages, he played with Bootsy Collins who late gave him his nickname. This name was coined from the fact that Edmonds had a face that portrayed him as a youthful individual. With time, he also went ahead and played the guitar for the Manchild band.

Additionally, Babyface briefly played for the Deele group. This was a group that played R&B and some light funk. It is from playing with the band group that he crossed paths with Antonio "L.A." Reid. Later on, these two would form a successful partnership in their producing and songwriting careers.

The two talented individuals crafted unique works for music groups such as Pebbles and The Whispers. They also wrote for renowned individuals such as Bobby Brown, Sheena Easton, Karyn White and several others. In 1989, the duo went ahead and came up with their record label dubbed LaFace Records.

Before this, Babyface had been hailed for his exceptional music writing skills when he drafted “Slow Jam” for an R&B band called Midnight Star. This occurred in 1983, and it formed an ideal platform for Babyface to earn major recognition in his songwriting talent.

Besides his songwriting career, Babyface also coherently worked on his career as a vocalist. Accordingly, in 1986, his debut album named Lovers was out.

Throughout the late 1980s, Babyface maintained the strong partnership that he had with Reid. This brought profound success to their end as they went ahead to write and produce songs for the likes of Michael Jackson, Paula Abdul and Sheena Easton.

It was also during this period when Babyface and his partner welcomed new artists to their newly formed record label. Toni Braxton, Usher, and TLC were some of the early members that succeeded while working with LaFace Records at the very beginning.

Babyface is to be credited for having written TLC’s highly successful second album. This album was titled CrazySexyCool. At the time, this writing and production went along to become the all-time bestselling album. The success of TLC also brought huge success to Babyface as a songwriter and a producer.

Additionally, with the help that he offered to the TLC’s group, it went to thrive as it sold over sixty million albums globally. Similarly, Toni Braxton also experienced an immense success under the direction of Babyface. Successful albums such as Toni Braxton – 1993 and Secrets – 1996 were largely credited to Babyface. In America alone, these two albums sold over 10 million copies, which was a huge success to Babyface’s career.

Recently in 2016, Babyface was part of the cast to feature in Dancing with the Stars Season 23.