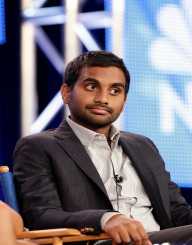 Aziz Ansari is a remarkable actor, comedian, and writer. He is renowned for his work ‘Parks and Recreation,' his series ‘Master of None’ and his unique stand up comedies. Alongside Alan Yang, he received two awards in 2016; an Emmy Award for outstanding writing for a comedy series and Peabody Award for his series ‘Master of None.’ Additionally, he has played in movies such as, '30 Minutes or Less' and 'Observe and Report.' As a writer, he released his first book ‘Modern Romance: An Investigation’ in June 2015.

Aziz Ansari was born in Columbia, South Carolina on February 23, 1983, to parents Fatima and Shoukath. His Muslim family migrated from Tamil Nadu, India to South Carolina. His mother occupation is in a medical office while his father is a gastroenterologist.
His parents raised him up in Bennettsville where he joined Marlboro Academy followed by his studies at South Carolina Governor’s School for Science and mathematics. Later on, he enrolled in New York Stern School of Business and earned his degree in 2004 with a major in marketing.

In 2005, the ‘Rolling Stone’ chose him for their ‘Hot Standup’ and in 2006, he won a Jury award for the best stand up in Aspen, Colorado at HBO’s Comedy Arts Festival.During the 2005 summer, he joined comedians Rob Huebel, Paul Scheer and director Jason Woliner, and as a group, they started making short films.

They created several series such as ‘Shutterbugs,' ‘Huebel’ and ‘Ansari.' Later on, they created ‘Illusionators’ which starred Ansari and Scheer as style Goth magicians for Criss Angel. The MTV comedy series featured these series in the mid-2006, and the group released the series on April 5, 2007, which continued for two seasons.

In the same period, Aziz Ansari continued making performances and tours on his standup comedy. From 2006-2007, he made performances with the Comedians of Comedy and Flight of the Conchords. During the fall of 2008-2009, his performance during the tour created the basis for ‘Comedy Central’ a DVD/CD special. Ansari started working with the NBC in June 2008 on ‘The Office’ comedy.

In April 2009, the ‘Parks and Recreation’ show was debuted starring Ansari characterized as Tom Haverford, where he portrayed an underachieving government employee with big dreams of succeeding. His outstanding performance was praised by critics such as the Entertainment Weekly and TV Guide which placed him on the top list in the TV MVPS.

On June 6, 2010, he hosted the 2010 MTV Movie Awards where he created short films such as ‘Stunt Kidz’ including his former Human Giant castmates, and  ‘Swagger Coach’ which he made alongside Zach Galifianakis. During this time, he received an award for the Best Comedic Performance and performed a musical tribute to the ‘Avatar’ film.

On July 2010, Aziz Ansari made tours across the United States basing on ‘ Dangerously Delicious’ film which he eventually filmed in June 2011 at Warner Theatre in Washington, D.C. ' Dangerously Delicious' film was later released for download on March 2012. During this time, he made a new tour based on ‘Buried Alive’ where he filmed his third special release ‘Aziz Ansari: Buried Alive’ in Philadelphia at the Merriam Theatre. Remarkably, this film was premiered on Netflix on November 1, 2013, followed by ‘Aziz Ansari: Live at Madison Square Garden’ in 2015.

Ansari made his television appearance on HBO series ‘Flight of the Conchords’ where he portrayed a fruit vendor with difficulties in differentiating the Australians from New Zealanders. He also made an appearance in the season eight of ABC ‘Scrubs’ as a new intern to the hospital and has a recurring role as Darryl in the animated comedy ‘Bob’s Burgers.’ In 2011, he made a cameo appearance in the Jay-Z’s and Kanye West’s collaborative music video for ‘Otis’ in the album ‘Watch the Throne.’

Notably, Aziz Ansari has made several film appearances such as, ‘I Love You,’ ‘Get Him to the Greek’ and ‘Observe and Report.’ On April 2010, he starred ‘30 Minutes or Less’ directed by Ruben Fleischer that was released on August 12, 2011.

Remarkably, he wrote and created the Netflix original series ‘Master of None,’ alongside Alan Yang and starred it as Dev Shah. This series received positive remarks especially from The New York Times which praised it as the year’s best comedy. Ansari's performance earned him a nomination for the Golden Globe Award for Best Actor – Television Series Musical or Comedy.

Ansari and Yang won the Emmy for the Outstanding Writing for a Comedy Series for their performance in the ‘Parents’ episode. They were also honored in May 2016, with a Peabody Award. The 'master of none' show was renewed and released on May 12, 2017.

Evidently, Aziz Ansari has engaged in several charity works. In 2012, he encouraged people to donate to Oxfam America by talking goat in an animated video. Later in 2013, he made a charitable performance for Boston bomb victims in Massachusetts, at the Wilbur Theatre. He gave the money collected for the tickets to ‘The One Fund and The Officer Richard Donohue Fund.’

Aziz Ansari started dating professional chef, Courtney McBroom in 2014 but their relationship ended in January 2016. Ansari has formed a food club together with his friends Eric Wareheim and Jason Woliner, where they visit restaurants dressed up in suits and captain hats. If the restaurant has good food, they reward it with ‘Food Club’ plaques.

Ansari has a brother named Aniz Adam Ansari who helped him write an episode ‘Master of None.’ Moreover, he has also been a close friend of Comedian Harris Wittels and has worked with him regularly.