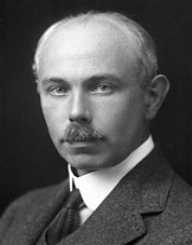 Arthur Harden was born on October 12, 1865.  He was an English biochemist. In 1929, he won the Nobel Prize in Chemistry. He conducted research and studied the fermentation of sugar and the fermentative enzyme actions. He is the one who established the synthesis of the antiberiberi factor by yeast and by removing sugars, organic acids and proteins from lemon juice.

Arthur Harden was born on October 12, 1865, in Manchester, Lancashire, England. He was born to Albert Tyas Harden and Eliza Macalister. He was brought up alongside eight sisters. He attended a private school in Victoria Park. He also studied at the Tettenhall College in Staffordshire. In 1882, he joined the Owens College in the University of Manchester. He studied under Sir H.E. Roscoe. In 1885, he graduated with first class honours in Chemistry. The following year he received the Dalton Scholarship in Chemistry, and so he worked with Otto Fischer at Erlangen. He received his Doctorate in 1888.

Arthur Harden became a junior lecturer at the University of Manchester. He later became a senior lecturer and an administrator. In 1896, he co-authored ‘A New View of the Origin of Dalton’s Atomic Theory’ with Roscoe. The following year he published a paper about the composition of Bronze and Iron tools which were discovered by Flinders Petrie. In 1897, he was appointed the head of the chemistry department at the British Institute of Preventive Medicine. While he was there, he started his research on microbiological chemistry.

In 1907, Arthur Harden became the head of the Biochemical Department. In 1911, he published his book ‘Alcoholic Fermentation.’ He was also a joint editor of ‘The Biochemical Journal.’ He was conferred the title of Emeritus Professor of Chemistry by the University of London in 1912.

In 1929, Arthur Harden won the Nobel Prize in Chemistry jointly with Hans von Euler- Cheplin for their investigations on the fermentation of sugar and fermentative enzymes.

In 1890, Arthur Harden married Georgina Sydney Bridge with whom he had no children. Georgina died in 1928. He died on June 17, 1940, at his home in Bourne End, Buckinghamshire, United Kingdom. He died of nervous disease.