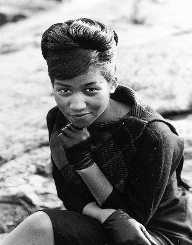 Aretha Louise Franklin. “The Queen of Soul,” was born on March 25, 1942, in Memphis, Tennessee. Her father was a preacher, but her mother - piano player and vocalist. She is one of the four children in the family. The family relocated to Buffalo when Franklin was two years old. But in 1948, her parents broke up, allegedly due to her father’s philandering. Her mother then moved back to Memphis with her son from the previous marriage.

Franklin’s mother did not abandon her children but visited them whenever possible. Her mother died in 1952, just before her 10th birthday. During this time, Franklin's father had learned how to play the piano. He also sang and led very emotional sermons. His “million-dollar voice,” as it was called then, led to his home being often visited by many celebrities.

When Aretha Franklin's mother died, she started to sing solos in church. When she was 14 years old, her father began to manage her and brought her with during his so-called “gospel caravan” tours. He was the one who helped her sign a record deal with J.V.B Records in 1956. While she was touring with her father, Franklin met Sam Cooke who she had a crush on.

After she turned 18, Franklin announced to her father that she wants to follow him to pursue the pop music career. Her father agreed and helped to produce a two-song demo. In 1960, she signed with Colombia Records and released her first single “Today I Sing The Blues,” which was a significant hit.

In 1961, Columbia recorded issued Aretha Franklin’s first album which featured her first hit single. The album was a success and peaked at number 7 on R&B charts. By the end of the year, she was named the new-star female vocalist. The following year, Colombia issued two more albums.

By 1964, Aretha Franklin had started to record more pop music. She was netting around 100,000$ from her performances. She also appeared in rock and roll shows. Although she was successful, it has been argued that her records company neglected her gospel background and did not fully understand her potential.

When her 6-year contract with Colombia ended in 1967, Aretha Franklin was signed by Atlantic Records. She issued some successful singles, and in the same year, her album I Never Loved a Man the Way I Love You, which earned gold certification. The following year she won her first two Grammy awards.

During this time, Franklin also became the symbol of black empowerment during the civil rights movement. She performed at the funeral of Dr. Martin Luther King Jr. and in 1969 was selected to play at the Democratic National Convention in Chicago.

Her most significant success came in the 1970s when she recorded top singles like Spanish Harlem, Day Dreaming and her albums Spirit in the Dark, Young, Gifted, and Black and her gospel album Amazing Grace. The latter sold in over two million copies. She worked with producers such as Quincy Jones and Curtis Mayfield and expended her repertoire including rock and pop covers.

Aretha Franklin’s career took a downturn in 1975 when the disco era had started. During this time she made the soundtrack for the Warner Brothers movie Sparkle, which raised her sales and won her an invitation to perform at Jimmy Carter's inauguration. In 1979, she was dropped from her record company.

Her career started to pick up again after the 1980 film The Blues Brothers. Her performance in the movie exposed her to the new generation of blues lovers and soon earned a new record deal with Arista Records. In 1982 album Jump It was released and won her a Grammy nomination.

Three years later, Aretha Franklin released her best-selling album - Who’s Zooming Who. The album featured collaboration with at the time favorite band Eurhythmics. In 1987, she became the first female artist to join the Rock and Roll Hall of Fame.

The following years were quiet in her career. In 1993, she sang at the inauguration of Bill Clinton. The next year, she received a Grammy Lifetime Achievement Award. In 2003, Franklin released her final studio album on Arista Records, So Damn Happy and two years later was awarded the Presidential Medal of Freedom. She also sang at the inauguration of Barack Obama in 2009. In 2011, she released an album on her label.

Aretha Franklin gave birth to her first son when she was only 14 years old. Soon after, she had her second son. Her grandmother and sister took turns in raising the children, while she was pursuing her career. Her next son was born in 1964 and plays guitar in his mother’s band during live concerts. Her first marriage was in 1961 with Ted White. Her father was against the marriage. In 1969 the couple divorced. It is known that the marriage was contentious and involved domestic violence. Her second husband was Glynn Turman. The couple married in 1978 at her father’s church. They divorced in 1982.

In 1979, when Franklin was performing in Las Vegas, her father was shot in his Detroit home and went into a state of coma. Her father never recovered and died in 1984.

Aretha Franklin has an honorary degree of Doctor of Arts from Harvard University for her contribution to music.