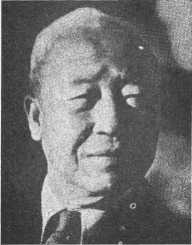 South Korean political Syngman Rhee was born on the 18 April 1875 in Pyongsan in what is today in North Korea.

After being educated in his homeland in the classical Confucian tradition, Syngman Rhee studied at a Methodist school.He then completed a BA at George Washington University (1907), an MA from Harvard (1908) and a Ph.D. from Princeton University (1914).

As a young man, Syngman Rhee became a nationalist and belonged to a group of young Koreans opposed to Japanese rule. This group was known as the Independence Club. His involvement led to his arrest and imprisonment in 1897. After seven years he was released from prison and left Korea for the United States where he studied and continued with his political activities.

Japan annexed Korean in 1910, the same year Syngman Rhee returned to Korea where he worked as a missionary and high school teacher. Opposed to Japanese rule, he left the country again in 1912 and went into exile in the US. Syngman Rhee was elected president of the Korean Provisional Government in Shanghai in 1919, a role he held for twenty years. He moved to Shanghai in 1920, returning to Hawaii in 1925. He spent the next few decades he remained politically active, campaigning relentlessly for Korean independence.

After the bombing of Japan at the end of World War Syngman Rhee returned to Korea where he was an influential right-wing politician who received unofficial sanction from the US government. In 1948 post-World War II Korean has divided at the 38th parallel into the Democratic People’s Republic in the north, and the Republic of Korea in the south and the UN recognized Korea’s independence. Syngman Rhee was elected to the South Korean Constitutional Assembly where he was involved in setting the framework for electing the first president of the Republic of Korea. The constitution was adopted on the 17 July 1948, and on the 20 July of the same year, Rhee was elected president. He won 92.3% of the vote.

During his presidency, the Korean War occurred. The war began after 1949 when the US Army started withdrawing from South Korea. Kim II-Sung, the North Korean leader, launched an unexpected attack on South Korea on 25 June 1950, sparking the war. The North Korean forces captured Seoul, and the UN Security Council approved sending troops to defend South Korea. The Soviet Union was boycotting the Security Council and could not veto the UN decision to send troops. Douglas MacArthur was put in command of troops from fifteen nations. MacArthur disagreed with President Truman on strategy and was later replaced. Peace talks began on the 8 July 1951. In 1953 an agreement maintaining the status quo of a divided Korea was signed on the 27 July 1953.

Syngman Rhee was re-elected in 1956 and again in 1960. In April 1960 a student uprising sparked by allegations of massive election fraud forced to flee South Korea for the US. He subsequently lived in Hawaii until he died in 1965.

Syngman Rhee was the first Korean to be awarded a doctorate from a university in the United States.

Syngman Rhee was the first president of South Korea, serving from 1948 until 1960. He was regarded an authoritarian figure with zero tolerance for his political opponents.

Syngman Rhee married Franziska Donner, an Austrian citizen, in New York City in 1934. The couple met when Donner was working as an interpreter in Geneva and Rhee was attending a League of Nations meeting.

Syngman Rhee died on the 19 July 1965 on Honolulu, Hawaii at the age of ninety.