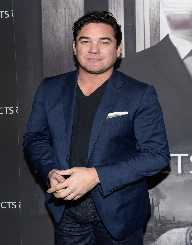 Anthony Clark is an American writer, a comedian, and actor who. Born on April 4, 1964, he is known for his role as Greg Warner in the CBS television series Yes, Dear from 2000 to 2006. He was also the host of NBC reality competition Last Comic Standing. After graduating from Emerson College in Boston, he entered show business as a stand-up comedian. After he played a periodic guest role on Ellen in the mid-1990s, he received a part on the series Boston Common.

Anthony Clark was born on April 4, 1964, in Lynchburg, Virginia to a father who was a factory worker and his mother a general store owner. He received education at Brookville High School and continued at Emerson College where he earned a degree in mass communication in 1986. While at Emerson, he was named the College Entertainer of the Year.

After graduating from college, Anthony Clark ventured into stand-up comedy. He featured in the short-lived television comedy series Boston Common and later in Soul Man. Clark also had a recurring role in Ellen. He played the supporting role of Billy in The Thing Called Love, 1993, starring Dermot Mulroney, River Phoenix, and Samantha Mathis and followed it with a role as Paul in The Rock in 1996. In 1995, he featured alongside Dave Chappelle, Louis C.K and Dave Attel in an HBO young comedians special hosted by Garry Shandling.

Anthony Clark became known for his role as Greg Warner in the television comedy Yes, Dear. For his role, he received a nomination for the Young Artist Award and Prism Award in 2006. That same year, Clark became the new host of reality competition series, Last Comic Standing and appeared in Alan Jackson’s music video for ‘The Talkin’ Song Repair Blues’ along with Mike O’Malley.

In 2011, he starred as Jack Schumacher in the comedy My Uncle Rafael opposite Missi Pyle and John Michael Higgins.