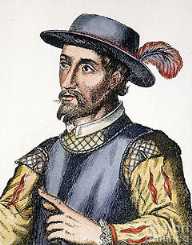 Juan Ponce de Leon is one of the Spanish’s proud royal sons. The birth of Juan came somewhere in the year 1460. Some believe that he found the fountain of youth in his many expeditions in the New World. Also, Juan is the founder of the current State of Florida in the United States of America. He got to serve in the Spanish military. Later Juan became an explorer and conquistador in the new world. Moreover, he also became the first duly appointed governor of Puerto Rico.

Juan Ponce de León was a high born in the Spanish Kingdom. He was born in the year 1460 in Santervas de Campos, Valladolid, Spain in 1460. However, there is little that historians could reconstruct of his family. But, some say that his families although highborn were poor in stature. However, they also were influential. So, the young Juan took up the immediate opportunity to serve in the Kings army. In the military, he got to learn a lot of skills that would prove useful later in life. Also, Juan got to be squire to one Pedro Núñez de Guzmán who was one of the Kings Knights.

Moreover, he became a soldier after being a page at court for some time. As a soldier, Juan got to fight against the Moors in Granada, and they won. After the war, he did not have much to do in Spain, so he decided to venture out into the world. Plus at the time Christopher Columbus was planning to venture out to current America. So, Juan an opportunity and took it in 1493. Juan then ended up in America where he got to deploy his military skills to subdue the natives.


Sailing To The New World

Upon the conclusion of the war in Spain against Granada, Juan got to realize that there was no use for his skills at home. Therefore, like many other young men he got unto a boat and sailed to the New World. Juan was out into the world looking for opportunities to deploy his skills. So, in the year 1493, along with other voyagers and Christopher, Juan reached the shores of the Caribbean. They made several stops there and finally went to their destination Hispaniola. They set down their anchor at the port of Puerto Rico.

Ponce de León met and married his wife Leonora who was the daughter of an innkeeper. Their union got to bare four children, three girls, and one boy. These girls were Juana, Maria, and Isabel while the young gentleman was Luis. Ponce de León’s family house is one of the remaining tourist sites in the South. It stands close to the city of Salvaleón de Higüey.

After becoming one of the top military officials in the Spanish army, he got the chance to explore the Island Puerto Rico. Later the appointed of the Spanish crown named him the Governor of Puerto Rico in the year 1509. In his position as governor, he got to be quite wealthy. Due to the riches that came with the territory. However, the son of Christopher Columbus, Diego Columbus challenged the legality of his rule of Puerto Rico. Juan lost his seat and went back to expeditions in the North. There, he managed to get to La Florida. He then named the colony Florida.

After losing to Diego in court, Juan went out to being an expeditionary again. So, he took his boats up North till he came to La Florida. So, Juan decided to name the place Florida during his first voyage. Some believe that during this period he was searching for the Fountain of Youth. In the year 1514 Juan went back to Spain where he goes the honors of a Knighthood from the King. King Ferdinand gave him the powers to be the governor of Puerto Rico and then take Florida. However, his plans to capture Florida suffered a setback when the King died. So, Juan had to back to Spain to get the reassurance from the new ruler.

In the year 1518, almost two years later, Juan went back to Puerto Rico. So, with the blessing of the Crown, he took a party to Florida to start conquering. However, they got to meet with an overwhelming local force that saw him injured. One of the natives had wounded him during the scuffles. So, they stopped the advance and retreated to Cuba. They had underestimated the fierceness with which the local Calusa native would react. They took the chance to defend their territory and won overwhelmingly.

Juan Ponce de León got a nasty wound in one of the battles with the local Calusa native. He then retreated to Cuba in the hope of recovering, but all did not go as planned. Juan’s wounds were severe, and he died soon after getting to Cuba. Juan’s family then took his body back to Puerto Rico where he got buried in a tomb. The location of the monument is in the Cathedral of San Juan Bautista.