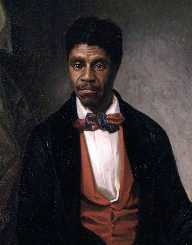 Dred Scott was a bonded labor by birth. His parentage has remained unknown till date. However, it is widely believed that his parents were also slaves. The exact date and year of his birth is unavailable. It is presumed that he may have been born in 1795 in Southampton County, Virginia. Peter Blow, a local property plantation holder, was the original owner of Dred Scott. When Blow moved to Huntsville, Alabama, in 1818, he took all his property and slaves along with him including Scott. In 1830, Blow again changed his residence and went to St. Louis, Missouri. This time too he carried all his slaves with him. Peter Blow passed away in 1832. U.S. Army surgeon John Emerson purchased Scott after the death of Blow.

Dred Scott moved along with his new owner Dr. Emerson. He stayed with Emerson during the latter’s posting as a physician at Fort Armstrong, Illinois. Located near the present day city of Rock Island, the army post was within the jurisdiction of Illinois State. Slavery was already abolished in this state. Scott could have claimed his freedom during his stay in the free state of Illinois. However, for reasons best known to him, he refrained from claiming freedom from his slavery. Similarly, he stayed at Fort Snelling, an army post under the jurisdiction of Wisconsin Territories. Dr. Emerson was posted in that army camp from 1836 to 1838 for a period of two years. The law of that region prohibited slavery and pronounced it illegal. However, again for some strange reasons, Scott did not apply for his freedom.

In 1836, Scott, during the course of his stay at Fort Snelling, became attracted to another fellow slave girl called Harriet Robinson. The 19-year-old charming teenager was a slave under Major Lawrence Taliaferro. Taliaferro was the US government appointed representative authorized to officially interact with Native American tribes. Scott married Harriet in due course of time. The couple never claimed their freedom in spite of residing inside a free state. However, Harriet’s ownership was transferred to Dr. Emerson after their marriage.

Scott and Harriet continued to follow their owner Dr. Emerson in his successive postings. The states where they were staying in were mostly Free states. The Scott couple could have again applied for their freedom from slavery. However, they did not do so. Dr. Emerson married Eliza Irene Sanford during his posting at Fort Jesup in Louisiana. During the Seminole War, Emerson parted with his wife and slaves and went to Florida. He came back after the war but got stationed at Iowa territory. The slave and his wife stayed back in St. Louis, Missouri. In December 1843, Emerson passed away abruptly. He left the ownership of all his properties to his widowed wife including the Scott couple.

Meanwhile, the Scotts began renting out their services to other persons during their stay in St. Louis. However, they had to hand over all their hard earned money to their then owner Irene Sanford. Realizing the problem, Scott couple finally claimed their freedom. Unfortunately, Mrs. Sanford declined their appeal. Thereafter, finding no other option, Dred Scott filed legal proceedings to free themselves.

Dred and Harriet Scott sued Irene Sanford for their freedom on April 6, 1846. After an initially failed litigation due to some legal technicality, the Missouri State Court declared Dred Scott a free man on January 12, 1850. However, attorneys of the Sanford appealed to the Missouri Supreme Court to revoke the decision. In March 6, 1857, the Missouri Supreme Court incarcerated Scott again to slavery. This was a glaringly partisan pro-slavery decision of reversing the lower court order.

Irene Sanford married Calvin C. Chaffee, a known abolitionist, in 1850. As per the laws prevalent at that time, the husband could control his wife’s properties completely. However, Chaffee was totally ignorant about the whole litigation. He came to know about the whole incident only after the pronouncement of the final judgment. Enraged and embarrassed, he immediately made arrangements for transfer of the ownership of Dred Scott to Taylor Blow. Eventually, Taylor Blow, by virtue of his citizenship of the free state of St. Louis, Missouri set Scott free from enslavement.

Dred Scott and his wife were officially freed from enslavement on May 26, 1857. His case attracted a national audience. Scott rehabilitated himself by working as a porter in a city hotel. He had already attained a celebrity status by then. On September 17, 1858, he died after suffering from tuberculosis. His wife outlived him long enough to witness the final abolishment of slavery from the US soil.