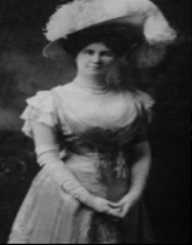 Author Anna Katherine Green was born on in Brooklyn New York on the 11 November 1846 to James Wilson Green and Catherine Whitney.She had three siblings, and her mother died when she was young.

Her father was a criminal lawyer, and Anna Katherine Green started writing novels based on her knowledge and observations of her father’s work involving criminal cases in New York City. Her first book was The Leavenworth Case and, when it was published in 1878, it became a bestseller.

Anna Katherine Green was writing in the same vein as Edgar Allan Poe as well as Wilkie Collins, author of The Woman in White. Wilkie admired Green’s writing. She was one of the first women in North America to write crime novels with her detective Ebenezer Gryce foreshadowing Sherlock Holmes. Green later corresponded with Arthur Conan Doyle who also enjoyed her books. Another admirer was Agatha Christie

Green’s novels were praised for their accuracy, particularly her attention to detail and her knowledge of how the law is applied in criminal cases. She went on to write almost thirty crime novels plus two books of poetry and other fiction, earning her living as a writer for decades.

Other publications are The Golden Slipper and Other Problems for Violet Strange (1915) which consists of nine short detective stories. The Butterworth Series: That Affair Next Door (1897), Lost Man’s Lane: A Second Episode in the life of Amelia Butterworth (1898) and The Circular Study (1900) and The Old Stone House and Other Stories (1891).

Anna Katherine Green married Charles Rohifs in November 1884. Rohlfs was an actor and stove pattern designer who later became known for his artistic furniture, His work featured in the International Exposition of Decorative Art in Turin (1902) and today his pieces are held in a number of collections including the Metropolitan Museum of Art, Princeton University Art Museum, the Los Angeles County Museum of Art and the Museum of Fine Arts Boston.

The couple had three children, a daughter, and two sons.

Anna Katherine Green died at age eighty-eight on the 11 April 1935 in Buffalo, New York, and her husband died the following year.