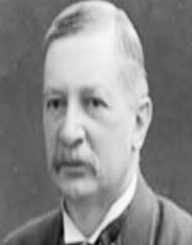 Johannes Rydberg was born 8th November 1854, to Sven and Maria Rydberg. He was born in Halmstad, Sweden, and was an only child. Rydberg was only four years old when his father died.

Despite the family not having much in the way of income, Rydberg was a talented student and did well in his studies. After high school, he studied at Lund University, and graduated with his Bachelor Degree in Philosophy, in 1875. He then went on and completed his Ph.D. in mathematics, awarded to him in 1879.

Rydberg’s interest in physics was experimental rather than theoretical, and over the years this proved a hindrance to his academic career, but he stayed on his right path, nonetheless.

In 1884, Rydberg published his first scientific paper. The subject of the paper was the periodic table of elements. Over the years, he had been trying to find a formula for what seemed to be a random increase in weight for the different atomic structures in the periodic table. This then led to his research in spectral work.

After years of study, in 1890, Johannes Rydberg published his findings. Called, On the Structure of the Line Spectra of Chemical Elements, it was a significant contribution to spectral studies. Rydberg came up with a formula that allowed spectra data to be mathematically presented.

In 1897 he was denied a full professorship at Lund University but was appointed as a provisional professor of physics. He also maintained his position of assistant lecturer. During this period, he also had to work as an accountant at a local bank, to help bring in enough money to raise his family.

Rydberg was made Professor of Physics at Lund in 1901. He retained the position until 1915, at which time ill-health forced him to step down.

Johannes Rydberg devised the Rydberg formula, which was able to predict the wavelengths of photons. There are also Rydberg atoms, which are a particular type of atom.

Johannes Rydberg was nominated for the Nobel Prize in Physics in 1917, but no prize was awarded that year.

He was nominated again in 1920 but had passed away the year before.

Rydberg married Lydia Carlsson in 1886. She was the daughter of a medical official. They had three children.

Johannes Rydberg believed that his spectral studies could help with the theoretical understanding of the atom and its chemical properties. In 1913, this was proven by the work of Niels Bohr. A spectroscopic constant developed at the time has been named the Rydberg constant in his honor.