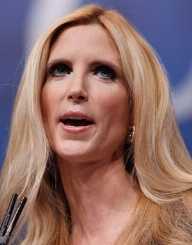 Ann Coulter was born on December 8, 1961, in New York City, New York. She along with her family lived mostly in Connecticut. Her father John was a lawyer and her mother Nell was a homemaker who also raised Coulter's brothers, James and John.

Ann Coulter had an early start in publication. For one thing, she helped found “The Cornell Review” while she was studying for her bachelor's degree. She was also the editor of the Michigan Law Review.

After law school, she worked in private practice where she specialized in Corporate Law. She was also a law clerk for appeals court judge Pasco Bowman II. In 1994 Coulter joined the Senate Judiciary Committee working on issues such as immigrant and crime for Senator Spencer Abraham of Michigan. She also advised Paula Jones who sued President Bill Clinton for sexual harassment.

Ann Coulter gained public attention as the legal correspondent for MSNBC in 1996. Not only did she draw attention to her commentary, but also to her sharp tongue that got her fired in 1997, rehired, and fired again eight months after her return.

Coulter writes weekly columns and articles for a number of conservative publications and websites. Since the late 1990s, she has written for the Universal Press Syndicate, George magazine, and Human Events.

To date, Ann Coulter has written 15 books including her first book in 1998 titled High Crimes and Misdemeanors: The Case Against Bill Clinton. Her next best seller was Slander: Liberal Lies about the American Right in 2002. She has been a New York Times best seller at least eight times.

Ann Coulter published her latest book Resistance is Futile! in 2018. She frequents television and radio talk shows for political commentary and publicity for her books.

Ann Coulter is very outspoken and unapologetic about her beliefs regarding liberalism, media bias, and the Republican party.

She has never married nor does she have any children.

Ann Coulter has made the #1 New York Times best sellers list for some of her books including High Crimes and Misdemeanors.

Ann Coulter is known for being outspoken, and it has cost her jobs during her career. For example, she was released as a commentator for MSNBC because of her insults to the U.S. Ambassador to France Pamela Harriman during her memorial.

She was rehired, but then fired once again after eight months when she was in a heated argument on air with a disabled Vietnam veteran. After her book, Godless: The Church of Liberalism in 2006, her columns were dropped from a number of newspapers when she criticized widows from the September 11th terror attacks.

If Democrats Had Any Brains, They'd Be Republicans (2008)

Guilty:  Liberal Victims and Their Assault on America (2009)

Demonic:  How the Liberal Mob is Endangering America (2012)