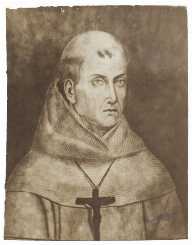 Junípero Serra was born on November 24, 1713, as Miguel José Serra in the village of Petra on the island of Majorca off the eastern coast of Spain. His parents Antonio Nadal Serra and Margarita Rosa Ferrer were from the farming community. He used to help his parents in cultivating wheat and beans and tended to their cattle from an early age.

Junípero Serra showed his inclination and interest towards religion by his frequent visits to the local Franciscan friary at the church of San Bernardino. He started attending the Friars' primary school at the church learning reading, writing, mathematics, Latin, and religion. He was blessed with an excellent voice, and he started learning vocal music and sang the liturgical songs, particularly, the Gregorian chants. Later, he studied philosophy at a Franciscan school in the capital city, Palma de Majorca. He became a Novice in the Franciscan Order at the age of sixteen.

Junípero Serra entered the Alcantarine branch of the Friars Minor on November 14, 1730, and commenced his novitiate period. It was a strictly thorough preparation to become a full member of the Franciscan Order. His birth name of Miguel was changed, and a new religious name ‘Junípero’ was given to him. The name was in honor of Brother Juniper, one of the first Franciscans and a companion of Saint Francis. His training started in the right earnest, and he engrossed himself in the study of logic, theology, metaphysics, and cosmology.

In 1737, after seven years of rigorously following the taut routine of meditation, prayers, physical chores, spiritual readings, choir singing, instruction, etc. Junípero Serra was given the status of an ordained Catholic Priest. He received a doctorate in theology in 1742. From 1744 to 1749, he worked as a Professor of Theology at the Franciscan University in Palma.


CAREER AS A RELIGIOUS PREACHER

Junípero Serra along with a team of Franciscan missionary departed from the port city of Cádiz in 1749 and landed in Veracruz, in the Gulf coast of New Spain (Mexico) on December 7, 1749. From Veracruz to Mexico City, a distance of 250 miles was covered by Junípero on foot through challenging terrain. On January 1, 1750, after completing the long and arduous journey, he reached Mexico City. During the problematic trek, his legs and feet had been injured. He entered Mexico City with swollen and bleeding legs. The wounds never wholly healed bothering him for the rest of his life.

Junípero Serra joined his fellow friars, who had covered the distance on horses, at College of San Fernando de Mexico. It was the regional headquarter for the Franciscan missionaries imparting specific training to its inmates. Junípero requested his inclusion at the center as a novice so that he could learn about the native Indians and acquire necessary knowledge about the mission administration.

In 1751, Junípero Serra volunteered to go on a mission to Sierra Gorda at the village of Jalpan, around 90 miles north of Santiago de Querétaro, nestled in an enormous rugged mountainous region in north-eastern Mexico. He was made the Mission Superior and Friar Francisco Palóu, a fellow missionary was entrusted with the job of his assistant. After reaching Sierra Gorda Indian missions, Junípero found it in an entirely disorderly condition. Among the majority of Pame Indians living there, many were converted to Christianity. However, they did not follow any rituals of the religion, and the inhabitants were mostly impoverished.

The two missionaries started off by learning the local Pame language and simultaneously involved the locals in different religious activities. They also sought to improve their financial condition by taking suitable measures. Junípero imported cattle, sheep, goats and farming tools to the Sierra Gorda Mission with the help of the college of San Fernando. The livestock and agricultural implements were brought to use by the residents under Junípero‘s supervision, and the local women were taught sewing, knitting, and spinning. All the products thus harvested or manufactured were then distributed among them according to their personalized needs, and surplus products were sold in the local market.

Junípero Serra left Sierra Gorda in 1758 after having solved a conflict between the Spanish soldiers, settlers and native Indians of the mission. It was a long and protracted battle over the ownership of the farmland which initially belonged to the native Pame Indians. Spain’s highest administrative official in Mexico, the Viceroy had to interfere, and the Pames and Friars finally reclaimed their land after a legal recourse.

Junípero Serra came back to the College of St. Fernando in New Mexico after leaving Sierra Gorda. For the next eight years, he stayed at the College working in different top-level administrative positions of the mission. As the Jesuits were being evicted from the various missions set up in New Spain (Mexico) by order of the Spanish Crown from 1767 onwards, Junípero was sent to Baja California to head a fifteen ex-Jesuits mission located there.

Junípero along with some of his companions reached the Loreto Mission established by the Jesuits in 1697 in Baja California in March 1768. Soon the administrative control of the mission was transferred to him from the hands of the Spanish Army. He enacted a La Sierra Gorda in this mission also, introducing agriculture and all other things as has been previously done by him at Sierra Gorda Mission, to improve the financial condition of the local converted Christian natives.

In 1769, Junípero Serra traveled to San Diego in Upper California and established missions throughout California in the next fifteen years. In 1770, he finally left San Diego and reached San Carlos, shifting his headquarters to Mission Santa Clara de Asís and spent his final years there.

Junípero Serra breathed his last on August 28, 1784, at Mission San Carlos Borromeo at the age of 70. He is laid to rest under the floor of the Church Sanctuary.

Junípero Serra is regarded as the Patron Saint of California and Hispanic Americans. The world celebrates his feast day on 1st July.