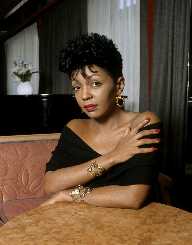 Baker was born in Toledo, Ohio on 26 January 1958. She was abandoned by her parents and was raised by a foster family. She grew up in Detroit, Michigan. Baker’s difficult upbringing continued as she her foster parents died in 1970. She then came under the guardianship of her foster sister. To earn money, Baker began singing in clubs around Detroit. She was a talented R&B singer, and she attracted the attention of a funk band, Chapter 8.

Baker was spotted by David Washington who was involved with the band, Chapter 8. Baker was invited to audition for the band. Following the audition Baker was invited to join the band. She toured with the group starting in 1975. In 1979, Chapter 8 received a recording contract from Ariola Records. The band released a self-titled album. The most notable songs from the album were I Just Want to Be Your Girl and Ready for Your Love. Ready for Your Love broke into the U.S R&B chart’s top 40. The band recording company was bought out in 1979 and the new label dropped Baker from the band. Baker became a waitress in Detroit and also worked for a law firm as a receptionist. Baker signed with the Beverly Glen label in 1982. The label was run by a former Ariola Records employee who had previously worked with Baker.

Baker launched her solo career with the album, The Songstress. The album was not a major success. It did outperform her work with Chapter 8 as it reached number twelve in the R&B charts. Baker released four singles from the album and Angel reached number five in the R&B charts. The album would eventually sell over 300,000 records, but a large number of the sales came after Baker’s later success. Baker did not receive any royalties from the label for her work and attempted to leave the label. After a protracted court case, it was ruled that Baker could leave the label. Baker signed with Elektra Records and was given creative control over her work. Baker’s second album, Rapture, was a steady performer but took of following the release of the album’s second single, Sweet Love. The song broke into the U.K top 20 and reached number eight in America. Over the next two years the album would sell 8 million copies. Another three singles from the album charted and the tour to support the album was released on video. For her work on the album Baker was nominated for and won two Grammys. 1989, brought further award success.

Baker won her third Grammy for her collaboration with The Winans on Ain’t No Need to Worry. Baker’s third album was a huge success. It topped the American charts and reached the top ten in the U.K. Three singles were released from the album. The title trackGiving You the Best That I Gotand Just Because reached number one in the R&B charts and charted in the top ten in the pop charts. The third single, Lead me into Love reached number four. Baker broke into the pop charts again in 1994 with the song, I Apologise, which was from the album Rhythm of Love. Rhythm of Love became the fourth album by Baker to achieve platinum status.

Baker did not release a new studio album again until 2004, this was due to a mixture of issues with her label and taking time to start a family. My Everything was released under the Blue Note Records label. It reached number 4 in the U.S charts and number 1 in the R&B charts. She followed up in 2005 with a Christmas album and was again nominated for a Grammy. 2012 saw Baker release a cover of the song Lately the song achieved massive airtime and earned Baker a Grammy nomination. Baker’s performance of the American National anthem is kept as a recording by the Detroit Tiger’s baseball team’ home, Comerica Park, and when they do not have a live performer often play Baker’s rendition.

Baker has been married once. She married Walter Bridgeforth in 1988. Following her marriage to Bridgeforth, Baker took an almost decade-long hiatus from recording. The couple had two children together, Walter and Edward. Baker and Bridgeforth divorced in 2007 after two years of separation.

Baker also won a Grammy for Best Soul Gospel Performance by a Duo, Group, Choir or Chorus in 1988 with the Winans. Baker has also won four American Music Awards. The African American awards group Soul Train Music has also honored Baker with seven awards. In 1994 Baker received a star on the Hollywood Walk of Fame. Baker has released four platinum rated albums and one number one album in the U.S charts, Giving You the Best that I Got.