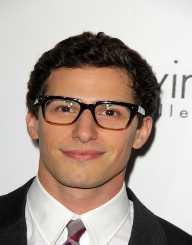 Born on August 18th, 1978, Andy Samberg is an American musician and a famed actor. He is popularly known for being a group member of The Lonely Island. Besides this, his fans grew to love him for being a cast on Saturday Night Live from 2005 to 2012. As a comedian, he also got highly acclaimed for the comedy series called Brooklyn Nine-Nine which premiered in 2013.

Andy Samberg was born on August 18th, in 1978. His place of birth was in Berkeley, California. At the time of his birth, he had been given the name David A. J. Samberg. However, when he was aged five, he decided to change his first name to Andy. He was the son of Joe and Marjorie. His father worked as a photographer whereas his mother was a school teacher. Samberg has two other siblings namely Johanna and Darrow.

Samberg went for his high school education at Berkeley High School. He graduated from the institution in 1996 and joined the University of California in Santa Cruz. He spent a few years here before moving to Tisch School of the Arts and later graduated in 2000.

After his graduation, he reunited with his sophomore friends Taccone and Schaffer in Los Angeles. Together, they shared an apartment. This is where they coined the name for their group “The Lonely Island,” as their apartment was given this name. Their comedy group, therefore, adopted the name that they used to identify their apartment. The trio made the best out of the camera that they had and the advantage of the internet. With these tools, they began taking small video shots dubbed “digital shorts,” edited and posted over the internet. During this time, they had nothing to do and all they could waste their time doing was posting their materials over the internet. Sooner or later, they were notoriously famous for their video shoots over the internet.

In 2005, the three friends were introduced to the producer of Saturday Night Live, Lorne Michaels. Jimmy Fallon had been impressed by their young talents, and the best he could do was to introduce them. This was Samberg’s career turning point as he managed to be cast on SNL. His friends were also taken in but taking different roles on the show.
Working on SNL also gave them an opportunity to feature their Digital Shorts on the TV show. A good number of their Digital Shorts such as "Laser Cats," "Lazy Sunday" and "Iran So Far Away" were mostly a subject of focus on SNL.

In 2007, Samberg became a nationwide star for the music video that he released featuring the eminent musician Justin Timberlake. The music video was called "Dick in a Box.” Their remarkable performance earned him an Emmy Award. This was just the beginning of a successful career as he was bestowed with another Emmy Award in 2009 for his role in the digital short "Motherlover.” Timberlake was also featured in this digital short. This production had been released with the main intention of showing respect to mother’s day. This was followed closely by another award in 2010 for "Shy Ronnie." This time round he featured Rihana.

Apart from his thriving career in Saturday Night Live, Samberg also featured in some films that got him recognition as a talented actor. Some of the movies that he has featured in are Hot Rod- 2007, Friends with Benefits- 2011, Grown Ups 2- 2013, The To Do List- 2013, Neighbors- 2014 and Take the 10- 2017. He has also lent out his voice in animated films such as Space Chimps- 2008, Cloudy With a Chance of Meatballs- 2009, Hotel Transylvania- 2012 and its sequels in Hotel Transylvania 2 and 3.

Andy Samberg wedded in 2013 to Joanna Newsom, a musician.