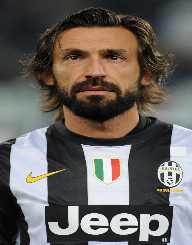 Andrea Pirlo is a prolific former Italian professional player who is regarded as one of the best deep-lying midfield playmakers. Born on May 19, 1979, he is best known for his ball control, free kick ability, good passer of the ball and creativity. He played for the Italian national team and mostly Italian clubs until retiring when he joined MLS franchise. Pirlo began his professional club football career with Brescia as an attacking midfielder. He helped the team to win the Serie B title to gain promotion to the Serie A in 1997.

A year later Andrea Pirlo was sold to Internazionale but struggled to make it into the first team due to tight competition. Going on loan at  Reggina and Brescia, he was finally sold to Milan in 2001. At Milan, manager Carlo Ancelotti helped Pirlo to discover his real position, which is playing as a deep-lying playmaker. He was able to master the position and soon enough became one of the best midfielders in the world. Pirlo was instrumental in Milan and helped the team win several trophies.

In 2011, Andrea Pirlo joined Juventus on a free transfer and helped the team to bounce back in winning trophies. Close to his retirement, Pirlo joined the MLS franchise in New York City in 2015. He retired from football in 2017.

Andrea Pirlo made a national team debut in 2002, and like it, 2015 was the fifth most capped Italian national team player with 116 caps.  He started his national team career playing at the under 15, 18, 21 and the senior national team. He was part of the team that won the 2000 UEFA European Under-21 Championship, winning the Top Scorer award and the Golden Player. He won several other trophies with the national teams and individual awards.

Andrea Pirlo was born on May 19, 1976, in Flero, Italy. He started his football career at the youth side of Flero and later at Voluntas.

In 1994, Andrea Pirlo joined the Italian Serie B side, Brescia, playing initially as a supporting sticker. A year after joining Brescia, the team qualified for the Serie A. Andrea Pirlo, therefore, made his Serie A debut in a match against Reggiana on May 21, 1995. This made him the youngest Brescia player to play in the Serie A. Andrea Pirlo performed very well and with that, he was signed by Internazionale in the 1998-1999 season. While there he struggled to make it to the first team and was therefore loaned to Reggina during the 1999-2000 season. He returned to Inter after the season, but after four appearances, he was loaned to former team Brescia. He helped the team place 7th in the Serie A and qualified for the 2001 Intertoto Cup.

After an unsuccessful career at Inter, AC Milan made a move to sign Andrea Pirlo for 33 billion Italian Lire (€17,043,078) in June 2001. Moving to Milan to play under manager Carlo Ancelotti was a significant breakthrough for Pirlo. Ancelotti played him as a deep-lying playmaker, and that was the right position for Pirlo. He was able to develop to become one of the best players to play in that position. He made a Milan debut in a 2-1 win over BATE Borisov on September 20, 2001, UEFA Cup. He helped Milan to win several titles including Coppa Italia, the UEFA Champions League, 2003, 2007 and UEFA Super Cup, 2003 among others. Pirlo ended his career with Milan scoring 41 goals in 401 appearances for the team.

In2011, Andrea Pirlo moved from Milan to Juventus on a free transfer with a contract to end in 2014. He made a Juventus debut in a 2-1 lost friendly match against Sporting Clube de Portugal. A Serie A debut was a 4-1 win against Parma in 2011-2012. He had a successful season with Juventus winning the Serie A, and the Supercoppa Italiana. He had a very successful career with Juventus and extended his contract by two years until 2016. Throughout his career with Juventus, he scored 19 goals in 164 appearances. He won four Serie A titles, a Coppa Italia, and two SupercoppeItaliane.

Andrea Pirlo made a move to the MLS franchise New York City after completing a move in July 2015. His annual earnings were $8 million, becoming the highest paid Italian player in all leagues at the period. The record was broken a year later after Graziano Pelle moved to the Chinese league. Pirlo made an MLS debut in a match against Orlando City on July 26, 2015, at the Yankee Stadium. He retired from professional football in 2017 after recurring injuries.

Andrea Pirlo played in the under 15, 18, 21 and the senior team level. He led the under 21 team to the 2000 European Championship. He won the best player of the tournament, scoring three goals. He made a senior team debut at age 23 on September 7, 2002, in a 2-0 win against Azerbaijan. His first goal for the senior team was in a 4-0 away win against Tunisia. The UEFA Euro 2004 was his first major tournament for the Italian National team. Pirlo played in the 2006 World cup and helped Italy to win the cup in the final match against France.

Pirlo won three Man of the Match awards in the tournament and won bronze as the third best player of the tournament. Pirlo played in the UEFA Euro 2008, 2012, 2014 World Cup and the 2016 Euro despite announcing his retirement from international competition after the 2014 World Cup. Pirlo made a total of 116 appearances for the Italian national team scoring 13 goals. This makes him the fifth-most capped player for the country.

Andrea Pirlo married Deborah Roversi in 2001. The couple has two children son Niccolòand daughter Angela. They ended their thirteen years of marriage in 2014 after his affair with Valentina Baldini was discovered. Pirlo and Baldini welcomed their twins Leonardo and Tommaso in July 2017. Pirlo has a stake in his father’s metal trading company Elg Steel in Brescia. Being a lover of wine, he owns a vineyard in Italy. Pirlo wrote the autobiography PensoQuindiGioco (I Think. Therefore I Play), published in 2013.