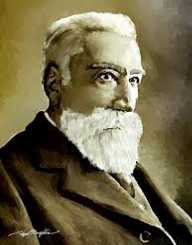 French writer Anatole France was born Francois Anatole Thibault on the 16 April 1844 in Paris, France. He was the son of a book dealer in Paris whose catalog attracted many famous writers and scholars to his shop. France was subsequently raised in a literary environment.

Anatole France attended a private Catholic school, College Stanislas in Paris, France where he was given a classical education, then studied at the Ecole des Chartes.

After his studies, Anatole France worked in various positions including as a journalist and as an assistant librarian in the French Senate (1876-1890).

Anatole France's literary output was tremendous as he was a prolific writer. Works include The Garden of Epicurus (1895). His breakthrough novel came with Le Crime de Sylvestre Bonnard (1881). He was awarded a prize from the Academie Francaise for the novel. Other work includes Le Livre de mon Ami (1885), Pierre Noziere (1899), Le Petit Pierre (1918) and La Vie au fleur (1922). France's work as a literary critic for Le Temps newspaper (1888-1892) and his reviews were later issued in four volumes as La Vie litteraire (1888-1892).

Anatole France was awarded the Nobel Prize for Literature in 1921.

Anatole France first wife was  Valerie Guerin de Sauville (m.1877-div.1893). The couple had one child, a girl Suzanne (b.1881-d.1918). He also had a long-term relationship with Arman de Caillavet and other relationships. His second wife was Emma Laprevotte, whom he married in 1920. Anatole France died on October 12, 1924; he was 80 years old.