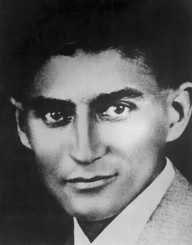 Franz Kafka was born on July 3rd, in 1883. His birthplace was in Prague (which is now known as the Czech Republic). He was born into a family of Jewish ancestry. He is a celebrated writer with exceptional writing skills. Kafka enrolled at the University of Prague where he studied law.

After his graduation from the university, he worked during the day in insurance and later in the evening; he embarked on his writings. He had a vision of putting more focus on writing, and therefore he migrated to Berlin in 1923. Unfortunately, he suffered from tuberculosis which led to this early death at the age of 40.

Born in 1883, Franz Kafka was not worse off as he was born into a middle-class Jewish family. His father, Hermann Kafka was a famous individual in the society as he was a ritual slaughterer in one of the Czech villages. With time, their father brought the entire family to Prague where he worked in his retail business. Julie, Kafka’s mother, was also from a wealthy family background. Her father was a successful business retailer.

Kafka was the eldest son in the family and that he had two other younger siblings. By the time he was six years old, his brothers had passed away while they were still young. This left him as the only son of his parents. Three daughters later died in the Nazi death camps.

Breaking out to work on his career was a difficult step for young Franz Kafka. This is because his mother was not educated enough to realize the dreams of his son in becoming a writer. His father’s success in his business made him a dictator in his way. His father’s character would later be featured in Kafka’s literary works. The complexity in relating to his father also had a profound impact on Kafka’s romantic relationships as he struggled a lot.

In high school, it was evident that Franz Kafka was academically gifted. This earned him admiration from teachers and his fellow students. Nonetheless, he still was resistant to the tight restrictions that school imposed on him.

In 1901, he attended Charles University in Prague where he graduated in 1906 with a law degree.

After graduating from the university, Franz Kafka went to work with an Italian insurance company named Assicurazioni Generali in 1907. The working schedule with the company made Kafka unhappy. This is because he lacked sufficient time to focus on his writing career. This contributed to his early resignation in 1908 after working for about a year.

After spending two weeks unemployed, Franz Kafka landed a better job with more flexible working hours at Worker's Accident Insurance Institute. This job gave him time to practice and perfect his writing skills during his free time. Years later, Kafka had become successful in the company as he also earned the trust of his boss. In 1915, he received a draft requiring him to avail his services in World War I. However; his employers worked out a deal that would postpone his military call to serve the nation. They regarded his services of great importance.

After some time, Kafka wanted to join the army, but he was prevented from doing so due to his medical condition. He was suffering from tuberculosis. During this era, there was no cure for tuberculosis, and therefore the Worker's Accident Insurance Institute merely put him on a pension. He retired in 1922.

Franz Kafka faced numerous difficulties in his relationship with Felice Bauer, his girlfriend. They got engaged to each other for two times, but they never wedded. In 1917, they called off their relationship. After this, he entered into another relationship with Dora Dymant. However, this relationship revolved around Kafka and his illness. With time the two moved to Prague. Kafka then moved to Vienna in a bid to find treatment for his disease. Unfortunately, he passed away on June 3rd, in 1924. He died at the age of 40.

Surprisingly, his writing expertise never got him the fame Franz Kafka desired when he was still alive. He only became famous after his death. Max Brod, his old friend, went ahead and published his works. Kafka’s best selling story was "The Metamorphosis." The story was published in 1915. Nevertheless, it had been previously completed in 1912.

In 1913, Mediation, a collection of other stories, was completed. "Before the Law" was part of this famous novel. In spite of the poor health that Kafka was going through, he kept his spirits high and continued to write. "The Judgment" was completed in 1916. Its story was based on the relationship that Kafka had with his father. A Hunger Artist was completed at the year of his death in 1924. This writing marked the end of his writing career.

Earlier on, Kafka out of self-doubt, he instructed his friend Brod to destroy his unpublished works. Brod never listened to this and went on to publish his works including The Trial, The Castle, and Amerika.