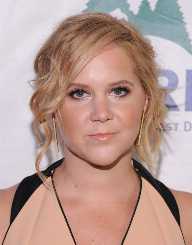 Amy Beth Schumer was born on June 1, 1981, to baby furniture company owner Gordon Schumer and Sandra Schumer (née Jones). She was born into a wealthy family living on the Upper East Side of Manhattan, New York, United States. All the family’s wealth came from her father Gordon’s business who was the second cousin of U.S Senator Chuck Schumer. Amy was raised in a Jewish family and had two younger siblings - a sister named Kim Caramele and a brother named Jason Stein. In later life, her sister became a comedy writer and producer while her brother became a musician.

However, within nine years of Amy’s birth, tragedy struck the Schumer family as they went bankrupt. At around the same time, her father was diagnosed with Multiple Sclerosis. They closed down the business and relocated to Long Island. Shortly after that, Amy’s parents filed for divorce. At Long Island, Amy got enrolled at the South Side High School in Rockville Centre, New York. Upon her graduation in 1999, Amy received the notorious titles of ‘Class Clown’ and ‘Teacher’s Worst Nightmare.’

While at Long Island, Amy Schumer also attended a Reform Synagogue where her mother was one amongst the board of directors. After completing high school, Amy moved to Baltimore, Maryland. Subsequently, in 2003, she graduated from the Towson University with a degree in theater. She again shifted base to New York City where she spent two years studying at the Meisner Intensive program in the reputed William Esper Studio. At the same time, to facilitate her studies and livelihood, she used to work as a bartender and a waitress.

One of the first known performances of Amy Schumer happened while she was studying at the William Esper Studio. In the off-broadway black comedy ‘Keeping Abreast,’ she was seen essaying the role of a young woman battling breast cancer. June 1, 2004, marks her entry into the stand-up comedy world. On this day, she delivered her first act at the Gotham Comedy Club. She slowly and steadily climbed the ladder of success and was consistently seen in various stand-up comedy acts.

Amy Schumer's rise to stardom came with the fifth season of NBC’s talent hunt reality show ‘Last Comic Standing’ (2007). Amy stood fourth in the competition, and her true comedy acts made her a household name. In the following year, Amy was seen in a reality show ‘Reality Bites Back’ which used to air on Comedy Central. She also appeared in a recurring role on the late-night show ‘Red Eye w/ Greg Gutfeld’ and was seen in numerous other comedic performances on shows like ‘30 Rock’, ‘Delocated,’ ‘Curb Your Enthusiasm’ and ‘Girls.’ In 2011, her appearance on ‘The Comedy Central Roast of Charlie Sheen’ stirred up a laughter riot and gave her immense fame and recognition.

In the same year, Amy Schumer released her standup comedy album titled ‘Cutting.’ Recognizing her talent and popularity amongst the masses, Comedy Central gave her the golden opportunity to start her special comedy series on their platform. Thus, her first standup comedy special ‘Mostly Sex Stuff’ was launched on Comedy Central on August 18, 2012. The show opened to favorable reviews and paved the way for Amy’s sketch comedy series.

On April 30, 2013, the first season of Amy’s sketch comedy series ‘Inside Amy Schumer’ was premiered on Comedy Central. The series showcased topics like sex, relationships, life with a tinge of humor. A day’s episode was divided into segments of varying lengths and comprised of sketches, stand-up comedy acts, and interviews. The show was a roaring success and was nominated for 8 Primetime Emmy Awards. The show ran for five long seasons.

Amy Schumer demonstrated that she was not just another female comic actor by delivering breakthrough performance in her first ever leading role in a film ‘Trainwreck’. She also wrote the film co-starring Bill Hader. Though the film became a box-office hit and also garnered good reviews from the critics, the film’s success was marred by the shootout that happened in Louisiana at a place where the film was being showcased. A mentally challenged man resorted to open-firing thereby killing two people. After the incident, Amy collaborated with her family member and U.S Senator Chuck Schumer to demand gun control legislation and awareness of mental health funding.

In 2015, Amy Schumer again came back with her comedy special on HBO titled ‘Amy Schumer: Live at the Apollo.’ In 2016, the show was nominated for three Primetime Emmy Awards in the categories of Outstanding Variety Special, Writing and Directing. Known for her raunchy humor, she became the first female stand-up comic to have a completely sold out performance at the Madison Square Garden in the city of New York.

Amy Schumer is also the author of her memoir titled ‘The Girl with the Lower Back Tattoo’ which was published in 2016. She is known to be a born feminist and has received acclaim for addressing social issues through comedy. She created a stir when she was clicked in the nude by renowned photographer Annie Leibovitz for the 2016 edition of the Pirelli Calendar which was aimed at breaking stereotypes and raise a voice against body shaming.

• ‘Inside Amy Schumer’ won a host of awards including the Peabody Award and the Writers Guild of America Award for Best Comedy/Variety – Sketch Series. It also won 2 out of the 8 Primetime Emmy Awards it was nominated for.

• Amy Schumer has been conferred with the Charlie Chaplin Britannia Award for Excellence in Comedy. She also won the Critics' Choice Television Award for Best Actress in a Comedy Series for ‘Inside Amy Schumer.’

• Amy Schumer has also made it to the list of Time magazine's ‘100 most influential people’ and Barbara Walters' ‘10 Most Fascinating People’.

Amy Schumer has previously dated wrestler Nick Nemeth aka Dolph Ziggler and comedian Anthony Jeselnik. From 2016 onwards, it is rumored that she is in a relationship with Ben Hanisch, a furniture designer based in Chicago.