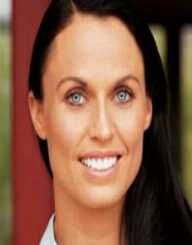 From performing for the country in Olympics in the year 1996 to staring at the cover of a Playboy in the year 2007, was the life for Amanda Beard. Amanda Ray Beard was not only one of the most renowned American swimmer but a seven-time Olympic medalist as well carrying a total of 2 gold, four silver, and one bronze medals. Her swimming skills were so exquisite that she holds a World Record in the 200 meter long course breaststroke.

Amanda Beard was born on the 29th of October, 1981 in Newport Beach, California, U.S. and was the youngest amongst the three daughters. She grew up watching her sisters practicing for swimming at local pools.

Her passion for swimming developed due to the courtesy of her two older sisters, and she joined the team in 1986. Amanda Beard excelled at the sport and later joined a more competitive team by the year 1994 by the name of Novaquatics. As a child, she was a brilliant student, but reports claimed that she did have mild dyslexia which somewhere or the other affected her grades as a student as well. Amanda was always a soft child, where she could get hurt very often. She even carried her teddy bear to her first Olympics in the year 1996 whose name was Harold, and she kept him with herself all the time.

Amanda Beard went through a lot of ups and downs after attaining puberty, when she began to have a disliking for her body which later developed into bulimia when she went to college and started cutting herself.

When Amanda Beard joined a new team in 1994, her favorite stroke was the butterfly. The coach noticed her doing it wrong, and she made her relearn the same again. It was her skills after she mastered the breaststroke which pushed her towards the Olympic trials and that too at the age of 14. She not only cleared the Olympic trials but also went on to win three medals during the same including one gold medal and two silver medals. Amanda became the 2nd youngest U.S. swimmer at that time.

Her next attempt came after a lot of hardships both on the personal and professional level. Her changes due to age made a big difference, though she came back powerfully. She even received a scholarship to the University of Arizona where she made it to the Olympic team for the second time to be held in 2000, and she won a bronze medal in Sydney.

Her best attempt came in 2004 Olympics where she not only won an individual gold medal but also set a World Record in 200m breaststroke accompanied by two silvers. Her next attempt came in the year 2008 where she was also the co-captained, but this Olympics did not go as planned as she could not even clear the preliminaries and ended up finishing 18th in Beijing. She began the training for 2012 Olympics after giving birth to a son in 2009, but she even failed to make it to the 2012 Olympic Team.

Besides swimming, Amanda Beard gave a try to modeling as well. As soon as she became an adult, she received a lot of sponsorship and endorsement deals. Though she gave a shot to modeling, and she did appear in several publications including an appearance for FHM, the Sports Illustrated’s 2005 swimsuit edition even though she continued to have negative feelings about her body.

Her most prominent and most famous work outside swimming included her nude pose for Playboy in the year 2007, which was a combined result of her therapy regarding her body and the hefty paycheck that she would receive. She was a part of the PETA campaign as well with her revealing photos unveiled in Beijing 2008.

Amanda Beard had a tough time with her relationships. Before her marriage, she had a couple of failed relationships out of which one was with Ryk Neethling. He was also a fellow swimmer, and the other was with NASCAR driver, Carl Edwards. But, it was Sacha Brown with whom she got married; he is a photographer by profession, and they met in 2005.

Her continuous struggle regarding her feelings for her body took her badly and also affected her performance in a competition which she mentioned in her memoir, “In the Water They Can’t See You Cry” released in the year 2012. But, with his support, she came out of this struggle as well. Now she continues to support swimming the same way she did as a child.