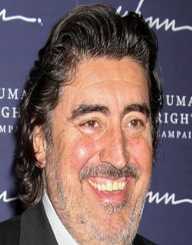 Alfred Molina is a British actor. He has acted in TV and film including the role as Doc Ock in Spider-Man 2.

Molina attended the Guildhall School of Music and Drama.

In 1977, Alfred Molina was accepted by the Royal Shakespeare Company. Molina worked on British television early in his career, but he credits his debut into acting as Satipo in the 1981 film Raiders of the Lost Ark. While his role at the beginning of the film was small, it was iconic to the film and a role he is very proud of.

Molina's southern European heritage contributed to his ability to adapt to multiple roles including his breakout role as a Soviet sailor in Letter to Brezhnev in 1985. He was also Iranian “Moody” Mahmoody in Not Without My Daughter in 1991, a Cuban immigrant in The Perez Family in 1995, a French mayor in Chocolat in 2000, and Mexican painter Diego Rivera in Frida in 2002. In 2006, Molina was Bishop Manuel Aringarosa in The Da Vinci Code. Whether it has been TV or film, Molina's versatility has kept him in numerous roles.

As a voice actor, Alfred Molina has been active in a variety of projects. He was in Robot Chicken, Gravity Falls, Dragons: Race to the Edge, and recently in Summer Camp Island.

Molina is still acting in films and currently lives in Los Angeles.

Alfred Molina married fellow British actress Jill Gascoine in 1986. He has one daughter from a previous relationship and two stepsons from Gascoine's first marriage.

Molina is an advocate for people who have contracted AIDS and helps raise money for research.