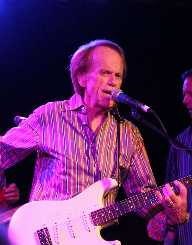 Alan Charles Jardine is an American singer and songwriter. Born on September 3, 1942, he is the co-founder of the American rock band Beach Boys. He is the band’s rhythm guitarist and sometimes acts as the lead vocals, which he did for songs like Help Me, Rhonda, 1965, Then I Kissed Her, 1965 and Come Go with Me in 1978. Jardine has also done some solo works, releasing the solo studio album, Postcard from California in 2010. He was inducted into the Rock and Roll Hall of Fame in 1988 as a member of the Beach Boys. He is the author of the children’s bookSloop John B: A Pirate's Tale in 2005.

Alan Charles Jardine was born on September 3, 1942, in Lima, Ohio to Donald and Virginia Jardine. During his childhood days, the family moved to San Francisco and later at Hawthorne, California where he attended the Hawthorne High School. While there, he met future bandmatesBrian Wilson and his brother Carl Wilson. After graduating, Jardine enrolled at the Ferris State University for the 1960-61 academic year. He transferred to El Camino College, where he reunited with Brain and suggested they form a band. Jardine was at the time more interested folks and had learned how to play the guitar and banjo.

The Beach Boys initially started as Pendletones at Wilson’s home. They tried doing folk songs as preferred by Jardine but the band later embraced rock ‘n’ roll. The started by performing at parties and other events before releasing their debut single “Surfin” in 1961, which Jardine played stand-up bass, rhythm guitarist and also served as a middle-range harmony vocalist. The song was a hit making it to the Billboard Hot 100 single list and peaked at No. 75. The following year, Jardine left the group to pursue a career a career in the aerospace industry but rejoined in 1963 upon Brain Wilson’s request. Beach Boys had signed to Capitol Records and released a debut album Sufin’ Safari, while Jardine was out in 1962.

In 1964, the band released The Beach Boys’ Christmas Album and Help Me, Rhonda, during which Jardine sang lead and would continue for other tracks. Jardine later served as a co-writer for the band starting with the Friends album. He co-wrote California Saga: California on the Holland album in 1973. Jardine alongside Wilson took also took on some of the production duties for the band. He helped in the production of the band’s M.I.UAlbum in 1978.

Jardine released his debut solo project, A Postcard from California in June 2010 with contributions from Brian Wilson, Mike Love, Carl Wilson, and David Marks. In 2011, he reunited with Beach Boys in a tribute concert for the 100th birthday of Ronald Reagan. In 2012, members like Mike Love, David Marks, Brian Wilson, Bruce Johnson, and Jardine reunited for a new Beach Boys album, That’s Why God Made the Radio and The Beach Love Boys 50th Anniversary Reunion Tour. Jardine contributed Wilson’s album, No Pier Pressure, released in April 2015.