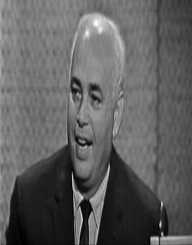 Allen Funt spent most of his career as a producer and director of some television shows.  His most recognized work is known for being “candid.”

Allen Funt was born on September 16, 1914, in New York City, New York.  His father Isidore was a diamond wholesaler.  Allen Funt also lived with his mother Paula and his older sister Dorothy.

Allen Funt was 15 when he graduated from New Utrecht High School in Brooklyn.  Since Allen Funt was too young to start his post-secondary education, he attended Pratt Institute for a year.

Allen Funt graduated from Cornell University in 1934 with a bachelor's degree in Fine Arts.  Allen Funt also went to Columbia University for the business school, then went back to Pratt Institute.

His experience at Pratt connected him to a job in the art department at an advertising agency.

Allen Funt moved up in the advertising agency as a copywriter and, later, a member of the radio department.  Around that time, World War II was going on, and Funt became a part of the Army Signal Corps for five years. During that time he worked on the use of a concealed wire recorder.  This led to his first show called “Candid Microphone” on the ABC Radio once he was discharged from the Army. Allen Funt was the original host of the prank shows Candid Camera.  Allen Funt played pranks on people and caught their reactions on film over the course of four decades.  Some of the gags included social psychological experiments or situations that were baffling to unsuspecting people.

Allen Funt had some co-hosts through the years including sportscaster Phyllis George and his son, Peter Funt.  It had its first start in 1948 with practical jokes affecting the average man or woman on the street. With the tagline “Smile, you're on Candid Camera!”, It was one of the earliest in the genre of reality TV.  Candid Camera ran on all of the major networks and gained success overseas as well. Allen Funt also hosted TV specials for both NBC and CBS.  His show continued on and off after he retired with his son Peter hosting the shows and specials.

In 1978, Allen Funt moved to his cattle ranch in Big Sur.  There Allen Funt focused on breeding horses, making furniture, or adding to his ranch home.

Allen Funt also wrote his memoirs Candidly, Allen Funt:  A Million Smiles Later after his retirement.  This book was added to his earlier writings from his career experiences.

Allen Funt married Evelyn Kesler in 1946.  The couple had three children, including his son Peter who co-hosted Candid Camera.  Funt divorced his wife in 1964.

That same year, he married Marilyn Ina Laron.  The couple had two children.  He and Marilyn were divorced in 1978. Allen Funt died on September 5, 1999, in Pebble Beach, California at the age of 84.

Allen Funt suffered from a stroke in 1993.  It impacted his health until his death in 1999.

One of Allen Funt's largest donations was the library of Candid Camera recordings and films to Cornell University.  He also donated a grant so that the content could be available for research and academic purposes. Another contribution to the work of media was a Fellowship at Syracuse University.  The fellowship was for post-graduate studies in radio and television to provide the broadcast industry with qualified black personnel.

Laughter was important to Funt, which is why he established the “Laughter Therapy” foundation.  Individuals who were suffering from serious illnesses could acquire videocassettes of Candid Camera at no charge.