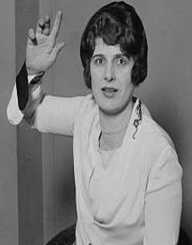 Aimee Semple McPherson was born on October 9, 1890.  She was a Canadian American Pentecostal Evangelist.  In the 1920s and 1930s, she was a media celebrity. She is popularly remembered for establishing the Foursquare Church. She died on September 27, 1944, at the age of fifty three.

Aimee Semple McPherson was born on October 9, 1890, in Ontario in Canada. She was born to Mildred and James Kennedy. She was introduced into religion at a young age by her mother who worked in the Salvation Army soup kitchens. She used to play with her toys in a church set up manner where she was a pastor while her dolls were the congregation.

In 1907, Aimee Semple McPherson met Robert James Semple who was a Pentecostal Missionary. Robert helped her in her conversion, and she later became a staunch Pentecost church member. In 1908, after she dedicated her life to God, she got married to Robert whom she also devoted her life too. They later moved to Chicago, the United States of America where they joined the William Durham’s Full Gospel Assembly.

Robert later died from dysentery after they had visited China. Later on, Aimee gave birth to their daughter, Roberta Star Semple. She also contracted Malaria after visiting China, but she recovered in the United States of America. After she got better, she started working with her mother in the Salvation Army.

Later she visited New York City where she met Harold Stewart McPherson who was an accountant. In 1912, they got married and bore a son, Rolf Potter Kennedy McPherson. After their marriage, they moved to Providence in Rhode Island. In 1914, she became very ill and testified that she heard a voice telling her that she should go out and preach. After she listened to the voice, her illness went away.

In 1915, Aimee Semple McPherson took her children and left her marital home. She later invited her husband to join her in the evangelism that she was involved in. Her husband followed her and joined her in her evangelistic work. The strain of evangelism later took a toll on her husband, and he went back to Rhode Island. In 1918, he filed for a separation. In 1921, they divorced after her husband pleaded abandonment.

In 1931, Aimee got married to David Hutton who was an actor and singer. However, in 1933 they separated and divorced in 1934. After the divorce, she continued preaching and healing people by faith all over the United States of America. She was a charitable person; hence she helped a lot of people. She developed a congregation that not only cared about spiritual growth but also the physical wellness of the distressed.

Aimee Semple McPherson used all forms of communication to preach to people and prepare them for the second coming of Christ. She later formed the church ‘Angelus Temple’ which grew into The International Church of the Foursquare Gospel. She also started the magazines ‘Foursquare Crusader’ and ‘Bridal Call.’ She later started broadcasting in Radios.

In 1924, she got a broadcast license from the Department of Commerce. During her ministry, she disappeared twice but was found. The first time she was kidnapped, and the second time she was believed to have drowned but was found in a hospital. She also went through a couple of lawsuits, but all of them came to an end in her favour. In her later years in ministry she had a lot of differences with numerous people but all this she handled with care.

On September 27, 1944, Aimee Semple McPherson died in California in the United States at the age of fifty three. Her remains were buried at the Forest Lawn Memorial Park Cemetery in California.