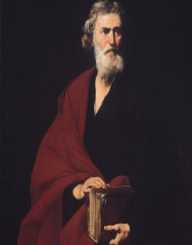 Levi, son of Alphaeus, was born in the 1st century AD. He was born in Capernaum, a small fishing village. The town sat on the north shore of the Sea of Galilee.

Levi started his career as a tax collector. As a result of his work, Levi would have been proficient in the Aramaic and Greek languages. He worked with the Romans in his role, and due to this, the other Jews disliked him immensely.

Jesus called Levi to the Ministry, and Levi followed him. He became known as Matthew.

Matthew followed Jesus as one of his four disciples. He saw both the resurrection and ascension of Jesus, and he preached the gospel in Jerusalem.

Matthew was one of the early followers of Jesus. He is known as Matthew the Apostle, Saint Matthew, and his birth name of Levi.

Several churches recognize Matthew as a saint. These include the Roman Catholic, Lutheran, Anglican, and Eastern Orthodox, among others.