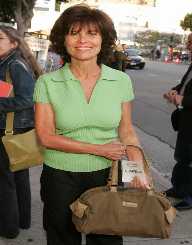 Adrienne Jo Barbeau was born on June 11, 1945, in Sacramento, California. Her father was a public relations executive for Mobil Oil. She also had a sister Jocelyn and half-brother from her father.

Barbeau began her career after moving to New York City in the late 1960s. She started to work as a go-go dancer, performing at various locations. At the time, go-go dancers often entertained troops, and during this time, Barbeau caught the show business bug and decided to pursue a career in acting. Barbeau made her stage debut in the 1964 Broadway musical Fiddler on the Roof, singing in the chorus. She later was offered the role of Hodel. She stayed with the play until 1971, when she left to play the lead role in the musical Stag Movie. As Cookie Kovac, Barbeau had to be naked on the stage, but for her role, she received critical acclaim.

After her breakthrough playing Cookie Kovac, Barbeau went on to play in more than 25 musicals and plays. One of her most well-known roles was as the tough-girl Rizzo in Grease. For her performance, Barbeau won the Tony Award in 1972. Barbeau made her TV debut on the 1972 show Maude. The show was quite successful and ran until 1978. During the last season. Barbeau did not appear in the majority of episodes.

During the 1970s. Barbeau appeared in several television films and shows. Like The Love Boat, Fantasy Island, Battle of the Network Stars. In 1978, Barbeau became majorly famous after appearing on a cheesecake poster. This posted confirmed her status as a sex symbol. Her popularity increased, even more, when critic Joe Bob Briggs referred to her as “two enormous talents on that woman.” Despite her success, Barbeau felt like her acting is not noticed because of her looks.

Barbeau wanted to make changes in her career and take up more serious roles. In 1980, her then-husband John Carpenter cast her in the horror film The Fog. This was her first movie appearance, establishing her as a genre film star. Subsequently, Barbeau appeared in several horror and science fiction films in the 1980s. Her best-known projects from the time were Escape from New York, Creepshow, and Swamp Thing. In 1981,  Barbeau also appeared in the comedy The Cannonball Run. Her other comedy appearances included Back to School (1986) and Cannibal Women in the Avocado Jungle of Death (1989).

In the 1990s. Barbeau appeared in several television films, like The Burden of Proof and The Drew Carey Show. She gained new fame after appearing in the animation series Barman: The Animated Series and Gotham Girls as the Catwoman. She also began working as television talk show host.

In 1998, Barbeau released her debut folk album, Adrienne Barbeau. The same year, she starred in the cartoon series Spies! In 2003, Barbeau began appearing in the HBO series Carnivale. She continued to work on the show until 2005 when she left to star as Judy Garland in the play The Property Known as Garland.

In the late 2000s, Barbeau guest starred on several popular TV shows, including hit series Dexter, General Hospital and Grey’s Anatomy. Barbeau also voiced the Greek goddess Hera in the God of War III video game. She also voiced a part in the game Halo 4 and Mad Max. In 2005, Barbeau took the role of Berthe in the Broadway Touring Company’s musical Pippin.

Barbeau’s first marriage was to director John Carpenter. The couple was together from 1979 until 1984. They had a son, John Cody in 1984, shortly before their separation. In 1992, Barbeau married actor and producer Billy Van Zandt. He is thirteen years younger than her. In 1997, Barbeau gave birth to their twins.

Besides her work as an actress, Barbeau has also written her autobiography. There Are Worse Things I Could Do. The book was published in 2006, peaking at No. 11 on the Los Angeles Times best-sellers list. In 2008 she released her first novel Vampyres of Hollywood, followed by sequel Love Bites in 2010 and Make Me Dead in 2015.