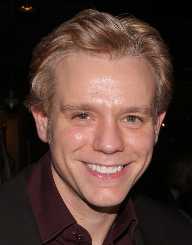 Adam Pascal was born on October 25, 1979, in Bronx, New York. He was raised in Woodbury, New York by his mother Wendy and his stepfather Mel Seamon. Pascal studied at the Syosset High School, before heading to New York Institute of Technology. After graduation, Pascal worked as a personal trainer.

In his earlier life, Pascal performed rock music with several bands formed with his friends and schoolmates. He later developed an interest in the musical theater. A friend mentioned him the musical Rent, which Pascal auditioned for. He got the role of Roger Davis- an HIV-positive rock guitarist. Pascal was majorly successful in the role and was nominated for the Tony award, as well as Theater World awards and the Obie Award.

After the success of Rent, Pascal quickly gained fame on Broadway. He was cast by Elton John in the musical Aida and participated in several charity performances, like the 2003 play Chess and 2004 Hair. Although Pascal left Rent in 2001, he and another cast member Anthony Rapp returned to the production in 2007. They also participated in the tour Rent: The Broadway Tour, which played in North America, as well as Japan and South Korea.

His next production was in the London concert version of Chess at the Royal Albert Hall, where Pascal played Frederic Trumper. The performance was recorded and televised on American and British television, as well as being released on a DVD. In 2011, he joined the cast of another Broadway show- Memphis, playing Huey Calhoun. He remained with the production until its closure in 2012, and the following year starred in the revival of Chicago as Billy Flynn.

Although Adam Pascal was successful on Broadway, he didn’t want to be only known as a Broadway singer. He and his Aida costar Sherie Rene Scott and her husband founded Sh-K-Boom Records. Pascal returned to his rock and roll playing and in 2004 released two albums- Model Prisoner and Civilian. In 2008, he released the album Blinding Light in collaboration with pianist Larry Edoff.

In 2006, Pascal performed in the Macy’s Fourth of July Celebration, singing during the fireworks display. The same year, he formed a band “Me and Larry” together with Larry Edoff. They began composing new songs and reworked several Broadway songs. In 2007, Pascal won the Golden Icon Award for Small Venue Concert. The band released their first CD in 2008.

Adam Pascal made his on-screen debut in the 1999 film SLC Punk! He next appeared in the 2003 film School of Rock and the following year, in Temptation. Pascal and five other actors from the original cast of Rent were hired for the film version of the musical, directed by Chris Columbus. The film was released in 2005.

Pascal has starred in several TV projects. He was a guest star in Cold Case in the episode Wilkomen in 2006. He also narrated and sang a song in the episode “Tale of the Mighty Knights” for the show The Backyardigans.

In 1998, Adam Pascal married Cybele Chivian, the daughter of Eric S. Chivan, M.D. He is the Director of the Center for Health and the Global Environment at Harvard Medical School. They have two sons, Lennon Jay and Montgomery Lovell.