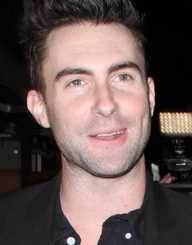 Adam Noah Levine was born in Los Angeles, California on March 18, 1979. His father is the founder of retail chain M. Fredric, and his mother is an admissions counselor. Levine has two brothers. When he was 7, Levine’s parents split.

Levine credits his mother for starting him out on the path to a career in music. He went to Brentwood School in LA, where he met his future bandmates Jesse Carmichael and Mickey Madden. During adolescence, he tried using hallucinogenic mushrooms and prescription drugs but stopped after his experience with drug Ambien, which left him unconscious for an hour.

In 1995 Adam Levine and 4 of his schoolmates formed a garage band Kara’s Flowers. Levine was the vocal and guitarist. The band played in several nightclubs, until 1997 when they were discovered by Tommy Allen. He had the band record an 11-track album. After graduation, the band toured in support of their debut, but despite all efforts, the album was not a success. After this failure, the group split up.

After the break-up of Kara’s Flowers, Adam Levine moved to New York to study. He later reunited with Carmichael, Madden, and Dusick to form a band once more. The group experimented with various styles and decided to set on groove-based music as their genre. They put together a demo, which was rejected by several labels, before falling into hands of James Diener from Octone Records. The group added the fifth member, James Valentine and was renamed Maroon 5.

During this time Levine was working at CBS TV show Judging Amy as a writer and began writing songs about his ex-girlfriend Jane. These songs were put in Maroon 5’s debut album Songs about Jane, released in 2002. The album sold estimated 10 million copies, and in 2014 became the 10th best-selling album of the year.

In May 2007 the band released its next album It Won’t Be Soon Before Long. Three of the album's singles received Grammy nominations, and “Makes Me Wonder” secured a win. After finishing World Tour for this album, the band started work on their new project. In 2010 the album Hands All Over was released. Although it wasn’t as successful as the previous albums, single “Moves Like Jagger” became the worldwide success by selling 8.5 million copies. Since 2012, “Moves Like Jagger” has been the 8th best-selling digital single of all time. Their next album was Overexposed, which includes the major hit “Payphone.”

From 2010 until 2012 Adam Levine was dating Russian Sports Illustrated model Anne Vyalitsyna, who he met while performing at the magazine's release party.

In May 2012 he began dating Namibian Victoria’s Secret model Behati Prinsloo. The couple got married in 2014. In September 2016 Prinsloo gave birth to the couple’s first child.

In his free time, Levin practices yoga. He started to exercise it due to back pain, and eventually replaced weightlifting entirely with yoga.

Adam Levine has made comedy appearances on Saturday Night Live. He has also appeared on Comedy Central’s A Night of Too Many Stars and Jimmy Kimmel Live. In 2011 he started a full-time project as one of the judges/coaches in reality series The Voice.

In 2014 he debuted his perfume line for men and women.

Adam Levine is an activist for various causes, like awareness for attention-deficit/hyperactivity disorder, testicular cancer, and LGBT rights.

Since Maroon 5 first started out in 2005, they have been nominated for several awards. In 2005 the group won a Grammy award for Best New Artist. The following year, single “ This Love” also won a Grammy for Best Pop Performance. The band has been nominated for Grammy 12 times. In 2011 and 2012 Maroon 5 Won the American Music Awards for Favorite Pop/Rock duo/band/group. In 2012, 2013 and 2015 Maroon 5 won the People’s Choice awards for the Favorite band.

In November 2013 People magazine named Adam Levine the “Sexiest Man Alive.” For his role in the TV reality series The Voice, Levine has been nominated for Teen Choice Awards and People’s choice awards for favorite celebrity judge. In 2014 he won the Teen Choice Award for Choice Reality Personality - male.