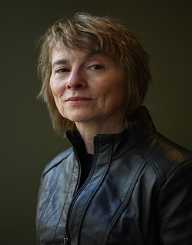 Academic and social critic Camille Anna Paglia was born on April 2, 1947, in Endicott, New York. Her parents Pasquale and Lydia Anne were immigrants from Italy. The family lived and worked in a farmhouse in rural Oxford New York, where she attended primary school. She later went to Oxford Academy High School where she became interested in French art history.

In 1964, Paglia enrolled at the Harpur College at Binghamton University. The same year she published her first poem “Atrophy” in a local newspaper. She graduated as the valedictorian in 1968. During her time in College, Paglia was known as a troublemaker. At one moment, she was on probation for committing 39 pranks. After college, Paglia enrolled at Yale Graduate School. Paglia was openly lesbian at the time.

Her first academic position was at the Bennington College in 1973. Paglia was at the time reading Susan Sontag and became increasingly interested in her views. Paglia arranged Sontag’s appearance at the college. Sonntag appeared an hour late and gave a very boring speech. After this, Paglia became disenchanted with the author.

While at Bennington, Paglia began studying works of Jane Ellen Harrison, James George Frazer and other authors, which led her to develop a theory of sexual history. She also laid out ideas on matriarchy, androgyny, sadomasochism and other topics. Her Yale Ph.D. thesis was Sexual Personae: The Androgyne in Literature and Art. In 1978, an incident with feminists and academic-led to her resignation from Bennington.

In the 1980s, Paglia finished her book Sexual Personae but was not able to publish it. During this time, she earned a living as a part-time teacher at Yale, Wesleyan and other colleges in Connecticut. In 1984, she finally got a permanent job by joining the Philadelphia College of Performing Arts.

In 1995, Paglia became a member of the editorial board of the classics and humanities journal Arion. She also began to write a column for Salon.co the same year until 2001, and later in 2007. In 2005, Paglia was named as one of the top 100 intellectuals by the Foreign Policy and Prospect journals.

Paglia is the author of several books. Her first and most recognized book was Sexual Personae: Art and Decadence from Nefertiti to Emily Dickinson in 1990. It was followed by the 1992 book Sex, Art and American Culture: Essays and the 1994 book Vamps and Tramps: New Essays. Her latest works have been Glittering Images: A Journey Through Art from Egypt to Star Wars in 2012 and Free Women, Free Men: Sex, Gender, and Feminism in 2017.