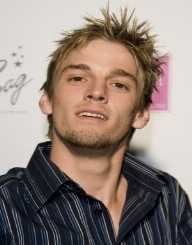 Aaron Carter was born on the 7th December 1987 in Tampa, Florida into a family with some Spanish and Blackfoot ancestry. He has four siblings including fellow musician Nick Carter.

Aaron Carter received his training initially at the Frank D Miles Elementary School and later at the Ruskin School, both schools being in Florida.

Aaron Carter is a multi-instrumentalist, singer, and dancer and he formed his first group at age seven, singing lead vocals in a band called Dead End. At age nine, he left the band and started doing solo performances. He performed a cover version of The Jets, Crush on You as an opening act for the Backstreet Boys (his brother Nick Carter’s band), and this brought him to the attention of the music-loving public. In 1997, he released his first album which included his single Crush on You. The record was very successful in Europe, reaching gold status in some countries.

Aaron Carter started out as a young hip-hop singer and found fame in the early 2000s with a mostly teenage fanbase. He had a song Have Some Fun with the Funk on the Pokemon: The First Movie soundtrack(1999). He also had songs on the soundtracks of The Princess Diaries (2001) Little Bitty Pretty One; Disneymania I Just Can’t Wait to be King and three songs on Jimmy Neutron Boy Genius (2001): Leave it Up to Me, AC’s Alien Nation and Go Jimmy Go.

Aaron Carter appeared as himself in episodes of Lizzie McGuire and Sabrina, the Teenage Witch in 2001. In 2002, he played Liam Curtis in Family Affair. He made a cameo appearance as Darren in Fat Albert (2005) and starred in the House of Carters with his siblings (2006). Grandstand (2007). He played the lead in Popstar (2005) and Supercross (2005).

Carter was a contestant on Dancing with the Stars in 2009; his dancing partner was Karina Smirnoff.

He made various appearances in 2013, touring for the first time in eight years. In 2014, he did a hundred and fifty shows across  Northern America. Then in 2016, he released a comeback single and music video Fool’s Gold.

In March 2017, Carter tweeted that, in a matter of weeks, 33.5 million had listened to his latest single Sooner or Later on Spotify.

After his parents divorced in 2003, he lived with his father, then later with his siblings. He currently resides in California.

Aaron Carter entered a rehabilitation facility in 2011, the Betty Ford Center in California.

A keen sportsperson, his hobbies include surfing, basketball, soccer, golf and motocross racing. Aaron Carter also does weightlifting and is a gymnast.

Aaron Carter is an environmentalist and is particularly interested in the protection of the exposed areas in Florida.

Aaron Carter took legal action against his mother in 2003 when he accused her of misappropriation of $100,000 of his money. They have since resolved the matter, and no further legal action was taken.

Was forced to declare bankruptcy in 2013 because of a massive tax debt owing to the United States Government. The debt has since been paid.

Lou Pearlman, Carter’s former manager, was sued by Carter’s parents for non-payment of royalties. Pearlman was later imprisoned for fraud and died in 2016, in the eighth year of a twenty-five year sentence.