Those born under the Chinese zodiac signs of the ox and dragon have a lot of potential. However, their biggest obstacle will be in whether or not they seek the same things in life. They have different natures and even different beliefs. The Ox and Dragon relationship will survive only if they look to the same place at the same time.


The dragon is bold and daring and will find the ox’s stubborn and critical manner more tolerable than others. They are dreamers, with a determined and industrious type of demeanor.

The Chinese ox is more dogged, traditional, and meticulous. They don’t particularly enjoy confrontation and like to avoid disagreements. In the Ox Dragon compatibly, both could learn something from trying to understand each other’s patterns and inspirations. 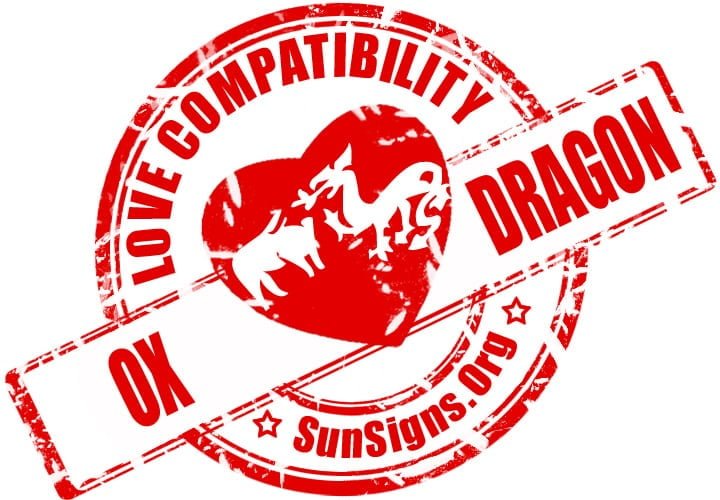 When an Ox and Dragon are in love, the two won’t find it easy to give and take. Both have the capacity for understanding the other one, but both are also prone to being stubborn. The dragon will most definitely admire the ox’s tendency toward nobleness.


Since both of these Chinese zodiac signs are strong, unyielding signs, loving and understanding each other is very important to making their relationship work. Whether one or both can learn to let up a little is going to be what makes them work or not work in the long-term.

Initially, when the ox is dating the dragon, he can find them to be somewhat off-putting due to the fierce impulsive nature of the dragon. The ox is actually the opposite of this, tending to be more stable, reliable and somber in nature.

The dragon is active and daring. They prefer being around people, especially close friends. The dragon man or woman is a determined individual and very often works with the motivation of being acknowledged for their accomplishments.

The ox man or woman who value importance finds this trait of the dragon’s very appealing. This part of the dragon’s nature tends to motivate the ox to try harder to achieve their own success, especially if it is a material one.

Oxen are also more socially withdrawn which other people can find trying and unlikable. They have a bad habit of being seen as close-minded especially in social gatherings.

Other people will feel their opinions are not appreciated or heard by an ox because they see them as being petty and less reputable. They are not very temperamental, but when they do get angry and fight with the dragon, it’s much bigger than a petty argument.


While the ox is not very sentimental, they can be very sensual, which the dragon appreciates, having similar qualities. In bed, the Ox and Dragon make great partners sexually. Their beliefs are where they are likely to clash.

The ox, leans a little more towards being disinterested and somewhat more logic driven. They are not bothered by doing things alone. If a friendship between the Ox female and the Dragon male has to succeed, then they have to learn to ignore their differences.


Chinese horoscope compatibility predicts that if the Ox Dragon couple pursue a similar goal but find the end result not to their liking, the dragon is most likely to be aloof. The ox has a habit of being traditional, apathetic, and disconnected. However, the dragon is very social and thrives on continual adoration and appreciation.

The Ox male and Dragon female love compatibility is negligible. They have to learn how to truly give and take for their relationship to work. Else this partnership is heading for a breakup.

The Ox Dragon marriage or any love relationship will be helped tremendously if they set a common goal and the two push to succeed and actually do so.